No Way Out - Contempt 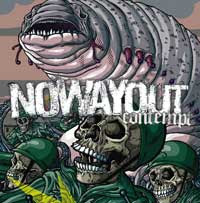 According to their myspace profile, they have already started working on their new CD. Even though, their debut Contempt from 2008 is still fresh and since I guess most kids outside the Australia are not familiar with them, it’s time to shed some light on this one.

I have to be honest, at first I just couldn’t get into this one. But the more I listened to the album, the more I was able to appreciate the energy and intensity of the songs. I still think that some parts of the record, like the ending of the title song Contempt, are passable and simply work against them, but these moments are luckily outshined but some really tight songs, like my personal favorite on the album, Bangerang. What I like about it is the perfect balance between pure hardcore aggression and melody. One moment they sound like a regular mosh-core band and next they throw in some creative guitar work to give songs some depth. They show a lot of creativity on this album and it sometimes make them sound like Evergreen Terrace playing Until The End songs. Probably the band’s biggest strength lays in their ability to easily switch from heavy to melodic without losing consistency. Just listen to Bangerang or 605 and you’ll know what I mean.
Even if some of the songs on this one seem to be forgettable, it doesn’t fail to deliver real gems and in the end, Contempt is actually a good record and got some good vibes goin on. It’s diversified enough to keep your attention and at the same highly moshable so all the pit warriors should find it a worthwhile grab.

No Way Out
Dogfight Records