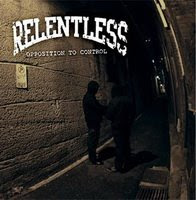 This is a short record so there will be no beating around the bush. Clocking in 11+ minutes, Opposition To Control by Relentless delivers a good dose of modern hardcore in vein of Terror, Since The Flood or Death Before Dishonor with mosh oriented approach and heavy sound.

Solid songwriting backed up with tight execution make it a record for everybody into this kind of stuff. Their vocal Trent did a good job on this one. His rough voice works well with the style they embrace. Talking about their lyrical delivery, their songs deal with topics like racism, leeches, gaining control of your life and having to deal with everyday bullshit. Even if it sounds cliché at first, lyrics are quite cleverly written and serve not only as an addition to the music. At first, somehow I got the impression this album could have been a better. Maybe it was me just being greedy, but I couldn’t fight the feeling they could have poured more energy into their music. But after few spins this CD really grew on me. Still, it’s not over the top, yet I’ve been listening to this record plenty times in a row and it didn’t get boring at all. They’re definitely going in the right direction and I can’t wait to hear more from them!