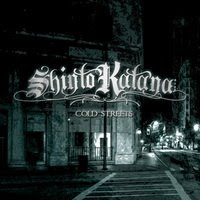 For those who don’t know, Shinto Katana is a Japanese sword, deadly sharp embodiment of the samurai spirit and courage. Listening to Cold Streets I can believe the band live up to their name. If you like dark and heavy side of hardcore, read on!.

Cold Streets begins with slow, moshy intro with heavy guitar work and a good dose of double bass that will make you prepared for what you are going to experience during the following 8 tracks on this CD. This album has a metallic feel to it, but they still keep it true to the hardcore genre and have plenty of energy and vitality behind them. Shinto Katana made sure their music is filled with heavy and catchy riffs backed by pounding rhythm section. Even thought it’s nothing revolutionary, they surely know how to write good songs. The production is great, the musicianship is excellent and the song writing is flawless. I must give them props for keeping this album intense, but still diversified with lots of hooklines and creative riffing. The tempo is mainly mid-paced but they do speed up things a little from time to time. Thanks to aggressive vocals and really good musicianship album managed to keep my attention for quite long. Overall feeling of this album is cold and dark, created both musically and lyrically. Songs deal mainly with personal stuff, like protecting your neck in this world full of hate and betrayal or fucked up relations with other people. Damn, what would you expect from an album titled Cold Streets? You can tell that the band put a lot of effort in this album and it was worth it.

PS. Did I mention really good rap outro? Keeping in mind all the whack rap songs made by hardcore artists, this one really does hold it’s own.