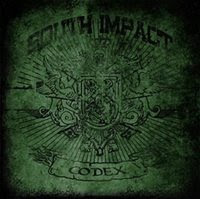 South Impact is a French band that play style which can be best described as old school hardcore with a strong touch of metal. Their music has a lot of energy & anger pouring out of it. Songs are heavy and fast with nice groove parts and some breakdowns now and then.

Musically South Impact displays a variety of approaches to the genre. Some of the guitar tunes come close to metalcore and thrash and there’s definitely much more going on here in the riffing department that on your average NYHC record. If I had to compare them to someone, think of mixture of in your face attitude of Madball with the intensity of Terror and thrash influences of Sworn Enemy. At the same time, names like Fat Society (their singer does guest appearance here) or Kickback pop to my mind while listening to this. The majority of the material is fast paced, but they aren’t afraid to slow things a little to give the songs more complexity. The production is top notch, giving it heavy sounds that is clear but not over polished. Apart from Bastard and Remy, both known from Fat Society, other guests on this CD include guys from Alea Jacta Est and Another Bleeding Season. This is solid record from a band that definitely deserves more attention!