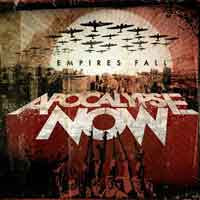 Those familiar with Apocalypse Now style of blending hardcore and metal can rest assured knowing that not much has changed since his last album, Confrontation With God. While most of the tracks on this new one follow the same pattern, they’ve managed to take things to the next level with even more intensity and vitality packed into these songs.

This is a type of hardcore that put the chill down my spine! I’ve been their fan since the Fat Society days and I gotta say that my believe and support for this band has always paid off with every record they put out. The vocals are sick and musicianship tight as hell. The whole album is loaded with brutal riffs and punishing beats. Empires Fall contains 10 songs, most of them at a high speed tempo but lots of creative riffing and memorable hooks give it a dynamic feel. They slow down from time to time but they don’t base their music on breakdowns that much. When you listen to this stuff another thing you might notice is a superb production giving this shit fat and heavy sound. Lyrically, they moved from the tales of the apocalypse based on a Bible to more socio-politically aware., yet still dark and disturbing stuff. I like the fact that can touch different topics on one album, like one track is about religion and politics and other one is a down to earth song about hardcore movement and what it means to be a part of it. Great hardcore album, that I can not stop listening to!