Blood In/Blood Out - Hopeless And Heartless 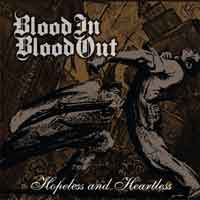 If you’re into raw and heavy hardcore you are probably familiar with the band. After two successful records for Spook City, their latest material came out on Thornz in 2008. Bad news is that while I’m writing this review Blood In Blood Out is on an “indefinite break”. I hope they will get their shit together again cause it would be a great waste of talent to let this band die.

Blood In Blood Out musicianship has definitely matured since the previous record. They maintain good balance between the harshness of hardcore and more creative song structures. They still keep it tough in the vein of bands like Madball or Death Threat but they aren’t afraid to throw in a few solos now and then and they know how to keep it diversified by giving room to slower and groovier parts. It definitely provide their music with some identity and nerve. Just listen to the way Life Of Pain builds up from a beginning guitar solo passage into an explosive wall of sound. Brilliant! The riffing is intense, the rhythm section is tight and vocalist Jaaron is pissed as hell. If you liked the band before this album was released, you'll like them even more now!

Ps. It’s good to see Thornz back in the game! These guys have released some seriously dope albums in the past. I can’t wait for more and I really hope for Strength For A Reason Show And Prove reissue!