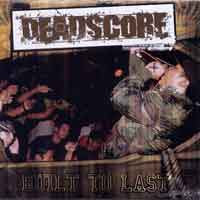 I didn’t know anything about Deadscore when I was buying this CD, I just thought it would be fine to give Malaysian band a chance. I don’t really recall hearing any hardcore band from that country so it came as a big surprise to me that this band is pretty damn solid.

Deadscore doesn't contribute with anything that hasn't been done by others but they play their music with certain vitality and skills. This is more heavy and aggressive side of hardcore, not unlike bands like Until The End or Terror. Their sound definitely has an edge to it but at the same the songs are catchy and melodic. It's quite clear that they know how to put a good song together and undoubtedly are capable of a blend of all that’s hype-able in modern hardcore. As for a debut this shit sounds really good. Fat production fits the music flawlessly. All the songs are cool but if I had to choose one that stands out I would go for Sellout. It’s fast and ends up with a pretty decent breakdown. Almost all the lyrics follow the same betrayal-revenge formula. They’re ok but if you feel that lyrics are of the same importance as music and you haven’t been fucked over by a friend lately you might be disappointed. To sum it up, it’s a good release that lives up to the standards of the hardcore today but is nothing over the top.