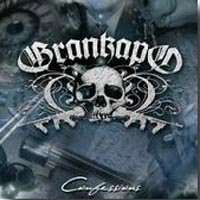 Grankapo bring nothing but energy on their debut release. While not being the most original, it certainly offers listeners its fair share of hardcore aggression.

The music is typical contemporary hardcore and it’s not hard to guess what bands have the biggest influence on them. Most of all they remind me of Madball from Hold It Down and Look My Way era. It’s almost the same vibe and vocalist Rui Fac sounds almost like Freddy himself. I know some can hold it against the band but just try to look at it as a record made by guys who clearly love NYHC, for the enjoyment of other guys who love NYHC. I can't say that they match the quality of their influences, but they aren't bad either. Even though all the songs on the Confessions aren’t much different from each other, it doesn’t bother me that much cause it’s a good listen anyway. Lyrically, it’s typical personal stuff, nothing ground breaking, but some lines are pretty well written. The most memorable track is To My Son, a great song with guest rap vocals and lyrics portraying the theme of fatherly love. When was the last time you heard a hardcore song from a proud father singing how much he loves his child and would always be there for him?!
When it comes down to it, Grankapo managed to find its niche in the scene and even if their style is nothing original, they deliver some good tunes and this album is worth a listen if you’re into NYHC.