Hard Work - Not One Step Back 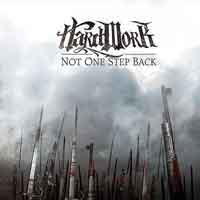 It was probably one of the most anticipated albums for 2008 for me. Now that that album has finally dropped, I can safely say it was worth waiting for. Not One Step Back burst of aggression and nerve.

Hard Work has been around for a couple of years but I would say this record seems to be special for them – it’s like a new lease of life for the band. No doubt, the tracks on this one are the best they ever recorded and the production is superior to anything before it. For those who don’t know, the band plays NYHC brand of hardcore with references to bands like Madball or Breakdown among others. They stick to the proven formula but put a lot of effort into song writing and there’s a surprising amount of variety to the songs. The riffs are thick and chuggy and backed by a powerful rhythm section and strong vocals. Majority of the time the band rely on fast and mid tempos but they throw in a good breakdown now and then. Most of the material is catchy and memorable and demonstrates the bands tight musical skills. Lyrically, they maintain a good balance between personal/real life topics and some slightly socio-critical stuff. Like I said, I’ve been waiting for this shit to be out and I can say I am not disappointed at all. I can guarantee that by the time you’ve listened to it a handful of times you’ll find yourself moshing around your room like crazy! This disc is simply not to be missed if you dig bands like Death Before Dishonor, Madball or Death Threat!