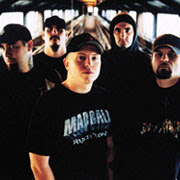 Hardcore metal leaders Hatebreed are set to release their long-awaited new covers album, For The Lions, on Tuesday May 5th, 2009 via E1 Music (formerly KOCH Records). This new release is the follow-up to the band's #1 Billboard charting DVD, Live Dominance (released September of 2008).

The songs on For The Lions were carefully selected by Hatebreed to represent a panoramic view of some of their favorite artists and greatest musical inspirations. Having completed the album in 2008, the band felt their work wasn't done yet and just returned to the studio with original guitar player Wayne Lozinak to record additional tracks for the album. The four new covers are among the most bludgeoning the band has yet to record. These include, "Ghosts Of War" (Slayer), "Supertouch/Shitfit" (Bad Brains), "Thirsty" (Black Flag) and "Suicidal Maniac" (Suicidal Tendencies).

For The Lions was produced, engineered and mixed by long-time band associate Chris "Zeuss" Harris. For a preview of "Suicidal Maniac," visit www.myspace.com/Hatebreed.

The complete track listing for For The Lions is to include the following covers: