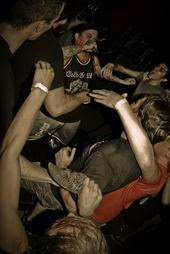 I Scream Records is very proud to welcome Hoods to the family.
Hoods founded in Sacramento, CA, in 1995 by Mike Hoods have grown into a Hardcore institution. Their music is a call to arms for all of those who have grown tired watching Hardcore be exploited and bastardized. Mike Hood has used his years of experience to craft one of the most brutal and honest West Coast Hardcore bands ever.

Hoods have released several albums on a number of independents and now the long-awaited new album "Pit Beast" is set for release in May 2009.

“14 years and we’re still here. Still playing Hardcore, still having fun and bringing the mosh. I had no idea when I started Hoods if we would even last a year. With so many ups and many more downs we definitely made our mark. Not only for West Coast Hardcore but all over the world. I live, eat and breathe this music". Mike Hood

Laurens says: "We are excited to join forces with Hoods in the year I Scream Records is celebrating its 15th anniversary. They're one of the hardest working bands out there and a great addition to our roster"

Hoods are on tour in North America in April 2009 and will invade Europe in May 2009. Make sure to check 'em out at a venue near you.