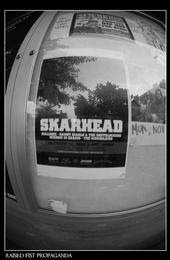 We are very excited to announce the signing of Skarhead for the release of their long awaited new record "Drugs, Music and Sex".

Skarhead was founded in 1995 by Lord Ezec and released the EP "Drugs, Money, Sex" that same year.

In 1999 their follow up album, "Kings At Crime" took the worldwide hardcore scene by storm and instantaneously became one of the all time classic hardcore records.

Today 10 years after the release of "Kings At Crime" Lord Ezec is back as frontman of the worlds most infamous hardcore bands.

"Drugs, Music and Sex" is recorded and mixed by Dean Baltulonis (Sick Of It All, Madball, Agnostic Front) and produced by Lord Ezec. The album features guest appearances by some of hardcore's greatest such as Freddy Cricien, CIV, Jorge Rosado, Jamey Jasta, Armand & Craig from Sick Of It All, Vinnie Stigma and more.

The album is currently being mixed and set for release late Summer 2009.

"I have chosen I Scream Records for the release of "Drugs, Music & Sex" because it is a true street flavored hardcore label. To me I Scream is the epitomy of hardcore music and no one gets more hardcore then Skarhead!!! So get ready for true N.Y.H.C. music made by the best in the business. A record that will make you bug the fuck out. Skarhead Rules!!!" - Lord Ezec.

Laurens says: "It's an honor to have Skarhead join our roster. The 30 something year old guys and girls out there who deny driving down the highway at full speed with "Kings At Crime" blasting during the nineties are just lying. "Drugs, Music and Sex" will take you right back there.
TCOB!!!"