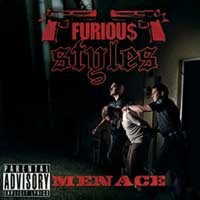 I just hate when such a great band like Furious Styles puts out a great record like Menace and then disappears leaving me with no chance to check these songs live. It’s really fucked up what they did!

Furious Styles is one of the bands that carve their own lane in lyrics and music. It’s not your typical NYHC record, it’s not your average old school, new school or whatever album. It is apparent throughout the album that the band has it’s own flow and stands out in the crowded hardcore scene of today. Just listen to the songs like Rat Poison or Stillbirth and you’ll get what I mean. What also stands out is the sincerity in the lyrics. With a machine gun flow singer Michaels spits out tales of fake friendships, broken dreams, empty promises, living a fucked up live and police oppression of course. I guess many of us can relate to this stuff. Production helps Menace a lot. It’s way more raw and dirty than before and that’s something I really missed on Life Lessons. The sound is meaty and clear enough to know what’s going on, but at the same time without getting overpolished. Overall, Menace combine the hard hitting song writing with some good old styled ‘fuck the world’ lyrics and is one of the few CDs I’ve heard recently that I simply love every track on. From start to the finish they keep the adrenaline level high and Menace ends up being an extremely powerful album!

PS. Did I mention ACAB cover by you know who? No other track could fit more on this record!