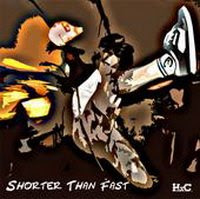 I gotta be honest, I don’t listen that much to youth crew/positive old school hardcore anymore, at least not as much as I used to. Times when I’m in the mood for this type of stuff are few and far between, but when it comes, Shorter Than Fast is not a bad option.

They’ve been around since 2003 and beside this EP have released a demo in 2006 and appeared on two hardcore compilations. I can sense a lot of dedication and sincerity in what they do. The band’s bio says they take inspirations from bands like Kid Dynamite, Raised Fist and Stand And Fight and even if I wouldn’t say they’re as good as their influences, it’s still a good listen. This four-piece’s sound is best described as positive old school hardcore. They sing in French and I agree it works great for them. The EP consists of 6 tracks and if I had to choosew the best one, I would go for the opening one called Vie Moderne, which is just a fast paced hardcore track but with nice build up at the beginning and guitar hook that makes it stand out. Overall, if you like this type of stuff you should give it a try. And if you know French and like to sing a long, make sure to check em out on stage cause these songs are just made for live performance. Personally, Shorter Than Fast impresses, but lacks the musical prowess to really make my jaw drop.