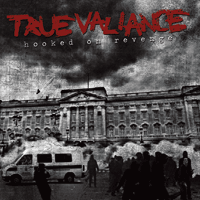 The opening riff on the first song sounds like taken straight from the Urban Discipline album (Punishment!!!) so I was immediately hyped about the rest of the record and even though it turned out to be less NYHC influenced that I thought, it still made a good impression on me.

True Valiance are from Bristol and have been around since 2006. I’ve heard people comparing them to bands like No Warning, One King Down, Earth Crisis or Until The End and I can agree they borrow some elements from all of these acts but they mix it up with style and skills . There are moments when NYHC seems to fit it, but then the breakdown comes giving it a strong new school feel in the end. Lyrically, with the album title like Hooked On Revenge and considering the rest of the bands on the Rucktion label, I was expecting some heavy thug guy stuff but it turned out to be more on the political side of the things. Some of the themes they deal with in their songs are racism, police state, apathy, society etc. There are only six tracks on the album so it doesn’t get tiresome but I wish they could diversify their songs a bit in the future so there could be more gems like You’ll Never Understand, an adrenaline filled orgy of mosh which alone makes it worth to get this album. It’s a good and solid record overall, but I just don't think this one shines like some of Rucktion’s other releases I’ve heard recently.