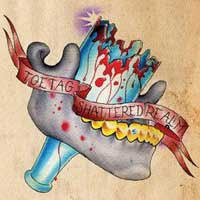 I don’t think this record needs any introduction. Shattered Realm is the band that gets most of the attention here and that’s understandable. They established themselves in the forefront of the metallic hardcore style and are one of bands who can’t fall off musically if they tried. Toe Tag is a new name in the game but don’t let it fool you. Those guys have been around probably longer than most of the kids reading this, having been previously involved in classic acts like Until The End or Mourning Again.

The album kicks off with the 3 songs by Florida based Toe Tag. A split CD with a well established band like Shattered Realm is a huge start for the upcoming band like them but hopefully they live up to the expectations. Toe Tag brings nothing but fire and terror with their brand of heavy and aggressive hardcore. The band has all the right tools. A heavy and intense style, good song writing ideas, punishing drum and thick riffs. Toe Tag bring the groove oriented hardcore which makes me think of mixture of bands like Shattered Realm with more NYHC oriented stuff, like Until The End or Since The Flood. Overall, this is very well produced and each track is structured. They delivered songs that should rank very high on the every hardcore kid list and I hope to hear more from the in the future.
Next, we get 3 songs from Shattered Realm. Their last album hinted towards a more hardcore oriented style compared to their earlier records and that did it for me. This was definitely the direction I had wanted the band to take. Just like Toe Tag, they contribute here 3 songs and these are truly aggressive and thundering tunes. Expect some heavy and powerful riffs and angry, deep vocals with a surprisingly heavy production to back them up. There song writing is complex with pace raging from fast parts to twisted breakdowns and if this doesn't have you moshing violently then nothing will. The music is drenched in an evil atmosphere, with lyrics about survival in this cold and harsh world. They also contribute the best song on the album, Bring The Violence Back/Every Man For Himself, which sends shivers down my spine every time I hear it. Originally performed by Fury Of V cover, the vocal attack by Joe Hardcore, Joe None, Chris (formerly SR, now doing vocals in Suffer The Living) and Greg from Mongoloids makes it one of the best hardcore cover tracks ever. If you want the hardest shit out there, here is my nomination.