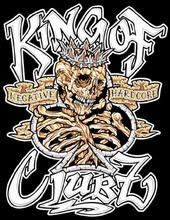 KING OF CLUBZ formed 2002 in Rock Island, Illinois. Right in the heart of the Midwest, U.S.A. Since their inception, they have brought the beatdown to their aggressive style of hardcore "Negative Hardcore".

KING OF CLUBZ bring you the live show that they would like to see- ROWDY! With 2 EPs, a split CD with Whatever It Takes and a full length album under their belts, they have had multiple European tours and played shows throughout the States from Colorado to New York with bands ranging from 18 visions, Walls of Jericho, Terror and Madball.

Presently KING OF CLUBZ is gearing up for another European tour and are ready to go into the studio to record another full-length CD for Belgium's own Good Life Recordings, which promises to raise the bar and bring an even more punishing sound than before !
Add KING OF CLUBZ on Myspace and check the fantastic tunes they have up now.