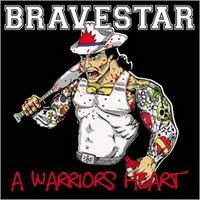 Beer. BBQ. Party. Brotherhood. Party. Hardcore. Party. These are some of the random thoughts that surface in my mind whilst listening to the debut album by Germany based Bravestar. Not only their sound is reminiscent of New York hardcore at its best, but they are also bringing this laid back attitude and fun with their music which automatically sets them apart from all the depression and stress ridden hardcore bands of today.

The band’s debut album is something between NYHC a’la Madball or Agnostic Front with some modern influences like Death Before Dishonor or Terror. If you like these bands, there’s no reason why you shouldn’t dig Bravestar. A Warriors Heart is one of those records that have just about every element needed to make it cutting edge: catchy choruses, angry vocals, gang shouting, melodic parts, reckless breakdowns, thrashing drums and heavy riffs. They can go fast and aggressive and they can go slow and heavy, adding slick, mid-paced grooves to now and then. The album gets right down to business with “We Will Not”, fast paced slab of hardcore and one of the most powerful tracks on the CD. The other songs on the album follow in a similar vein with Bravestar BBQ being the one that stands out the most. As the titles of the songs may suggest, the key theme of the record is mainly party, friendship, hardcore, scene, pride and having good fun basically. If you like explorations of social issues, they also got song about Nazis and how they’re not welcome at the hardcore scene. I know there are kids out there who will hold the lack of socio-political agenda against them, but I say fuck it – hardcore is also about fun so let’s fucking party! At the end of the day, Bravestar’s A Warriors Heart is good to mosh or just listen carelessly to.