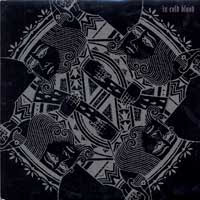 In Cold Blood is one of the most important bands of the 90’ and along with the names like Integrity and Ringworm defined the dark and sinister sound Cleveland is famous for. If you want to know where all the Clevo wannabe bands take their influences from, look no further.

When I heard In Cold Blood for the first time couple of years ago I had been already introduced to the sinister and dark vibe of Cleveland hardcore by the almighty Integrity and Ringworm, but even if it lacked the something new factor, I immediately knew this band gonna stay in my player for more than couple of spins. What we got here is a compilation of their Suicide King demo from 1999 (vinyl version pops up on ebay from time to time), self titled 7” from 1995 and some live tracks recorded in Germany in 1998. So this is actually the first time you can listen to these songs from a CD. If you’re not familiar with In Cold Blood, think of harsh and raw hardcore hybrid with one foot in the punk stylings of Discharge and dark metallic riffs that make you think of Slayer. The drums are punishing and thrash infused guitars add a big dose of heaviness. The production sounds dirty but fits the music and is not harsh on the ear. On top of it, you’ve got the insane and pure evil voice of Bourbon Ziegler. Most of you probably know their successful Victory release called Hell On Earth where different guy called Jason Popson did all the vocal work. Well, both guys fit the music just perfectly and are mostly responsible for the devilish feeling of In Cold Blood’s delivery. As with the rest of the players in this league, vocals are definitely the driving force of the band. And when we’re talking Cleveland, we’re talking devil in the music. Hatred, frustration, misery are some of the words to describe the overall feeling of the album.

If I had a gun to my head and had to say what wasn't perfect, it had to be the package of the album. I mean, to me In Cold Blood is as important as Integrity or Ringworm in shaping what we call Clevo sound and this re-release was a great opportunity to shed some light on the band’s history or just to share some stories from the band’s short existence. Instead, the CD booklet doesn’t provide much information and there are even no track titles or photos of the band. Nonetheless, it was a great idea to release this stuff nowadays. I hope more of the classic, hard to find gems will get such a treatment. In Cold Blood is a band that has a certain item in their music and important name in shaping the hardcore as it is today.