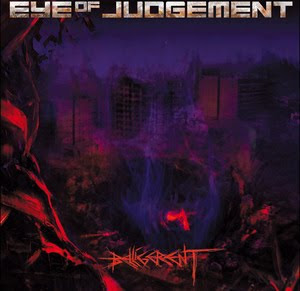 Wrath of Time Records is a new record label founded and run by all five members of the vegan Straight Edge band Eye of Judgement.

Born out of necessity the first release by the label will be Eye of Judgement's own sophomore album 'Belligerent'. This album was originally going to be released worldwide by Catalyst records but after long postponements the band parted ways with the label and decided to take matters into their own hands.

In the future, the label will be focusing on bands that support either a vegan or a vegetarian lifestyle and will be open to receive demos from any bands that adhere to these ideals

After four European tours and one US tour Eye of Judgement brings you 'Belligerent'. Recorded at Menno Bakker’s Bunt Studios, this album contains seven new Eye of Judgement songs as well as a cover of the song ‘Black Planet’, originally recorded by the Sisters of Mercy.

Expect a barrage of hate-filled metallic hardcore, moving slightly more towards the Crowbar spectrum of the universe but still holding on to the primary influences and references that initially formed Eye of Judgement. The artwork has once again been taken care of by the very talented Samuel Araya.