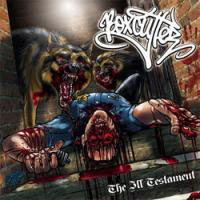 Polite, sensitive, mature, gentle ...Boxcutter is none of these things and less. The band is known for the hip hop tinges to its music and this is what separates them from your regular hardcore band. To kick things off the CD opens up with Kingz Of Thugz, which is purely rap joint with violin-filled beat where the band is flexing their lyrical skills to give you idea how it is in their world and what type of topics you’re about to experience on the rest of the material.

Things haven’t changed that much since their last album and their delivery is still rugged and raw meaning that they didn’t try to change their attitude to fit the scene. With all the rap going on, the band has struck a fine balance so there’s enough hardcore breaks here to get you moshing. And when they get heavy, they’re at the top of their game! The biggest banger must be Crown Of Righteousness, one of those songs that you'll listen to several times, before you proceed with the rest of the album. James Ismean’s son features on a joint and he kills it! It’s rude and outrageous and packs a lot of adrenaline. I also must mention BLF Soldier and Get Up as songs that seriously get my blood pumping. What I like are the references they make both in hardcore and rap tracks to the classic hip hop acts like Mobb Deep, Biggie, Run DMC, Slick Rick among others.

The Ill Testament is best when it goes in hardcore direction musically, while the hip hop tracks don’t appeal to me that much. It’s peaks are very high, but the rap joints on the album seem to be filler to some degree. That’s the problem, there are some great hardcore tracks here where the band’s delivery is fat and forceful but they are broken up by rap tracks that are formulaic and occasionally boring, very often begging for a faster, more dynamic flow. To my surprise, the hip hop track I’ve found most entertaining is The Recipe, which blends club beats with some gangsta swag and while I’m not much into this type of stuff usually, this song is ain’t that bad at all. I guess it’s because compared to the rest of the hip hop material it’s rather up-tempo and fast. Still, I don’t want these criticism detract from the truly impressive work that this album is. It has it flaws but it doesnt take away from the fact that The Ill Testament is a solid effort.