Danny Diablo vs. The Vendetta - When Worlds Collide 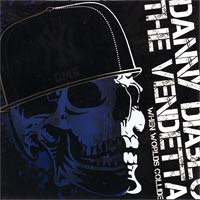 Never been a great fan of hip hop and hardcore or basically metal crossover bands. Sure, I dig E-town, Bodycount or Son Of Skam albums, but let’s not forget that there are many bands out there who are tried to tie these worlds together and failed miserably. So this is why not without a little concern I popped this CD in and pushed the play.

Fortunately, the band definitely gets the job done on this album as it grabs your attention right from the start with its take on hardcore and hip hop crossover. Danny Diablo and Vendetta open the disc with We’ll Never Fall which is kind of mid tempo song with a nice vibe to it, gang vocals and some decent ideas in the guitars department. Danny’s flow is also pretty dope on this track. It’s definitely great opener. The same goes with Never Satisfied, which is heavier and it’s here that the straight up rapping vocals are introduced. I’ve never been a biggest fan of Danny’s solo rap projects, but this time his flow is raw, gritty and sharp. The biggest name on this album is definitely Beastie Boys. I knew they were going to be featured here and even if it’s just a remix of their well known "Looking Down the Barrel of a Gun” song, I like the hardcore twist the band gave it. Some of the other people who put in an appearance here are Vinnie D, Roger Miret, Puerto Rican Mike, Necro, Skinhead Rob. It’s pretty impressive list and I haven’t heard a hardcore album with so many guests on it since the Skarhead’s Kings At Crime and 25 ta Life’s Friendship, Loyalty, Commitment. It’s definitely giving these songs ‘all in the family’ feel and I would like to see some more of such collaborations in hardcore in the future.

While the first half of the album is filled with aggressive hardcore bangers, the second half show this more rap driven side of the project in tracks such as 2 In Your Fitted, Snow White or Storm Clouds. While the lyrical content is nothing original or innovative, these tracks flow pretty well and don't get boring that easily. The tempos are relaxed and the band base their music on grooving riffs and strong beat provided by the suggestive and dynamic rhythm section. Most of the songs are catchy and get to the ears very fast. It’s here, blending the hip hop vibe with some heavier tunes, is where the band shows a lot of creativity and versatility making each track stand on its own legs. My favorite song gotta be Ready 4 War with concrete hard rhymes from Underground Professionalz. Definitely one of the album’s choicest cuts.

This album is a huge stylistic departure from their earlier works but I’m feeling they really managed to cook up their best material so far. Concerning the wide range of styles they’re blending here, it’s pretty well balanced with hardcore songs sounding hard and rap songs making you wanna nod your head. Damn, it’s actually lot better that I thought it would be.

The Vendetta at Myspace