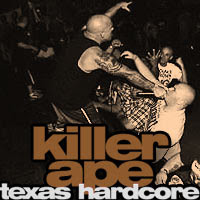 "I love the realness of it,the heart behind it, and the honesty,you cant realy top it.The things I hate are the fakes who just want to be on stage for attention or to be in a spotlight, and bands that dont support other bands, like the dudes you only see when theyre band is playing,you know who you are,HAHA,that shit is weak.people like that should be in some other scene."

How do you define your overall style?
Agressive,raw,honest,heavy and definitly some metal influence.

What's your goal with this band?
To put out songs people can relate to and to tour, play shows for kids in other countries and keep the spirit of real hardcore alive.

What do you have recorded so far?
Just a 3 song demo,its a real rough mix we banged out just to get the ball rolling.

When, how and why the band came to being?
Well I made the move from long beach,ca. last year to Houston which was a tough decision leaving my good friends in Hammerfist,and all my other cali friends,but was for the best as far as for the trade Im in and many other reasons.I have to play music to stay sane so it was a matter of time before I got somthing going here in texas.I already had many good friends here so it was fairly easy to network and get it going, the only hard thing has been the members I found that were willing to get it going live out in the San Antonio,tx area ,so the drive sucks for me haha,but thats how much I love this shit,Im not a lazy person so I do what it takes to make shit happen,Its been way worth it.I got in touch with Dailen(ex-drummer for sudden death) and Zak(current guitarist for Indisgust) and we slowly got it going,and now we have Jaun(bassists for flawless victory)who moved near where we practice and hes a good fit.Anyone in a band knows members are the hardest part of being in a band, with jobs,other bands,personalitys,etc. but we seem to bee making it happen for now.

Starting Killer Ape what bands did you listen to? Who influenced you as an artist?
I grew up on metal,death metal,punk,and hardcore, but probably the bands that influences us the most is Merauder, Crowbar, Death Before Dishonor and Biohazard. Merauder is hands down to me is one of the best bands ever, and we love the heavy sludge of crowbar. There is also some faster style music influence like A.F. and terror i guess.

Could you please expand upon "the killer ape theory" and what made you pick up this theme for a band? Does it stop at the name or do you dig deeper in this topic in your lyrics?
"The killer ape theory" was something my lady actually showed me when I was brainstorming for a name for the band. As soon as I read it it just seemed perfect. I wanted to have a name that was a little different then the average hardcore band name ya know, and for the day and age we live in it was perfect, In a time when mankind is constantly being lied to and controlled naturally he is going to become more and more aggressive and resistant to the powers that be and towards his fellow man.Its a twisted backwards world we live in so yeah It kind of stops at the name,but not all the way, because my lyrics are about real life and real aggression,pain,frustration,loss, and striving to live free. The e.p. thats coming out soon is going to be titled "INSTINCT TO SURVIVE" recession related theme so yeah its all kind of connected.

What I really admire in your band are down to life lyrics. Beside the killer ape hypothesis mentioned above, where do you get your ideas and inspirations when writing?
I get my ideas from my personal expieriences,truths and pain.

What are the best and worst aspects of being a part of hardcore scene?
The best aspects of being part of the hardcore scene are all the amazing friends and best times of my life,the worst is the politics,the egos,the competetition and the shady people with shitty attitudes who make it suck at times. What do you love and what do you hate?I love the realness of it,the heart behind it, and the honesty,you cant realy top it.The things I hate are the fakes who just want to be on stage for attention or to be in a spotlight, and bands that dont support other bands, like the dudes you only see when theyre band is playing,you know who you are,HAHA,that shit is weak.people like that should be in some other scene.Also bigger bands that dont check out new bands,that shit is gay too.Im kind of an asshole as you can tell,but there is a lot of bullshit that goes on that angers me,fuck it let time weed em out.

The hardcore scene is constantly changing in terms of music styles and ideas. Musically and lyrically do you feel like hardcore is in a good place today?
I think it just depends on what show youre at or what band youre listening to.Its how you look at it.I stick to the roots. To me hardcore was founded by people who had experienced life in the streets,jail,violence,death,drugs,broken homes,etc. Those are things ive expierenced first hand so I relate.I dont claim to be from the streets,but ive been through lots of crazy shit growing up so thats what I relate to.Im not saying everyone in hardcore has to have had those expieriences but I think its a little wierd that now days spoiled rich suburb kids are calling themselves hardcore.Everyone is welcome,but theres a reason its called hardcore,its not for the weak or the soft,to me its for those who know what real pain is,but who am i to say though,just my opinion,and hot topic is a realy bad thing that has intruded on it as well.shit is gay,but I probably wouldnt complain if our record was being sold there right?haha.Like most people who still believe in this I believe in honest from the heart lyrics, and a heavy straight to your face style is hardcore to me.I think theres a lot of trends or "styles" that come and go in hardcore,but a lot of it shouldnt be called hardcore,its a discrace,but I know when the parades pass the real people will always still be here.Like right now I gues the "posi" thing is or "metalcore"whatever the fuck that is.To me one band blows up with a certain style and then you have a hundred bands cloning them, so whatever, what ya gonna do.Every kid now days knows everything so you cant win haha.the tides will change again someday.You can call are music "toughguy' call it what you want,but the shit is real and you cant deny it.If you do youre probably gay.haha

What do u think of the hardcore scene here in Texas these days? What bands would you recommend for everybody to listen?
In texas right now its okay,of course not as strong as the WILL TO LIVE,PRIDE KILLS,TEN CROWNS days before I lived here,but theres still alot of shows and a lot of good bands,its always what you make of it.I think sitting around bitching about theses "new kids" or the "old days" doesnt help anything.I would recomend listening to the texas bands I mentioned above, and INDISGUST, GRAVEROBBERS, WEIGHT OF RESPECT, THE BURDEN, FULL CONTACT, FLAWLESS VICTORY, YOUR MISTAKE, BOTTOMFEEDER and many others that are the new"cool" bands from texas. Im sure some message board kid could tell you everything you need to know about every band from texas haha.

What's your definition of a real hardcore show?
Everybody going nuts and if somone gets clipped oh well. This is hardcore.

Your demo seems to have got a lot of positive feedback. Are there any plans for a debut LP in the near future?
E.P. coming soon,where hitting the studio this month to record 6 songs. "Instinct to Survive"e.p. coming soon. we're probably putting it out ourselves,then hopefully in 2010 a label will pick us up and put out a full length.

What are some other future plans for Killer Ape?
Record,more merch,and hopefully lots of shows outside of texas.

Shout outs and/or last comments?
Big shout out to you and the scene in Poland,hopefully we will make it over there someday to party with you guys, and big shout out to my GAMC family all over the world,all my west coast dudes ,and bands HAMMERFIST,COUNTIME,FORSAKEN,BEG FOR LIFE,HOODS,and the 86 family.thanks to anyone who supports KILLER APE.keep your eyes peeled for the e.p. ,shows,and new merch. Hardcore lives.