After the Wall Tumbled and other stories... 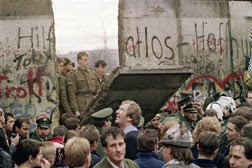 So the Berlin Wall has crumbled down and communism was almost defeated, but no way does it mean that the world's problems are over. Here's the selection of articles that caught my eye recenty:
After the Wall Tumbled - In 1989, Central Europe's fate was supposed to be uncertain and bleak. Today the region prospers more than ever - Slate.com

The Lessons of 1989The fall of the Berlin Wall is a reminder of the duty of solidarity. - Slate.com