The shape of dread to come 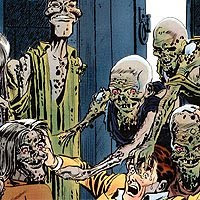 There's nothing better in life than hardcore and horror. Here's a couple of upcoming flicks you should keep an eye on. Stylistically, they range from atmospheric and eerie stuff to straight up zombie action. Some of it I'm really looking forward to and some just caught my attention, nonetheless I've got a feeling all of them gonna be a good watch.
Survival of the Dead

On a small island off North America's coast, the dead rise to menace the living. Yet...the islanders can't bring themselves to exterminate their loved ones, despite the growing danger from those the once held dear. A rebel among them hunts down all the zombies he can find, only to be banished from the island for assassinating his neighbors and friends. On the mainland, bent on revenge, he encounters a small band of survivors in search of an oasis on which to build a new life. Barely surviving an attack from a mass of ravenous flesh-eaters, they commandeer a zombie-infested ferry and sail to the island. There, to their horror, they discover that the locals have chained the dead inside their homes, pretending to live 'normal' lives...with bloody consequences. What ensues is a desperate struggle for survival and the answer to a question never posed in Romero's Dead films: Can the living ever live in peace with the dead?

Thrill-seeking military technicians and computer-game enthusiasts Tom (Faris) and Vic (Ford) recklessly smuggle a top-secret, virtual warfare training programme out of their base and into a spooky disused jail, while a vengeful spirit infiltrates the software and draws them into an all-too-real game of life and death. When Special Forces trainee Jess (Taylor) tracks the group down she embarks on a rescue mission that will take her into a virtual world as deadly as any real war-zone as she becomes their only hope for survival.

Inspired by actual events, JUNKYARD DOG is a gritty psychological thriller that delves the demented mind of a cannibalistic serial rapist who kidnaps his tenth victim in as many months on Halloween night.

JUNKYARD DOG tells the terror-filled tale of Audra Buckman, a nineteen year-old college co-ed, trapped in a month-long nightmare, struggling to stay alive and uneaten while being held captive, left half-starved and repeatedly savaged by JYD, an oddly charismatic, vicious man-eating monster. Audra's only hope of escape from this hell--and the mouth of a madman--is Samantha Deatherage, a tough FBI agent who is sent on a solo assignment to search for the missing girl.

On an entirely normal, beautiful fall day in Chester's Mill, Maine, the town is inexplicably and suddenly sealed off from the rest of the world by an invisible force field. Planes crash into it and fall from the sky in flaming wreckage, a gardener's hand is severed as "the dome" comes down on it, people running errands in the neighboring town are divided from their families, and cars explode on impact. No one can fathom what this barrier is, where it came from, and when--or if--it will go away.
Dale Barbara, Iraq vet and now a short-order cook, finds himself teamed with a few intrepid citizens--town newspaper owner Julia Shumway, a physician's assistant at the hospital, a select-woman, and three brave kids. Against them stands Big Jim Rennie, a politician who will stop at nothing--even murder--to hold the reins of power, and his son, who is keeping a horrible secret in a dark pantry. But their main adversary is the Dome itself. Because time isn't just short. It's running out.

Four characters wake in a desert, disoriented and lost with no clue where they are or how they got there. All four have fresh surgical scars and are on the verge of death. As they run desperately through a labyrinth of realities, both past and present, their ties are revealed and they come to see that only one of them will survive.
Blood: a Butchers Tale

Blood: a Butchers Tale, is the harrowing tale of Sam, a simple butcher who discovers that the love of his life, Darcy, is being seduced by a vampire.
As he investigates further, Sam realizes that his destiny is to become the destroyer of this blood thirsty race. Sam begins a killing spree with the slaughter of his beloved wife, then her blood addicted lover.
Sam then makes it his duty to systematically destroy the remainder of the clan, until he hesitates about killing Lily (Campbell), the last of her race. Helplessly he falls in love with Lily and learns to respect her desire to be normal.
Eventually Sam must battle with the possibility of repopulating the planet, with the exact race he set out to destroy.

Distraught, confused, and half-wild with fear, Sarah Carter emerges alone from the Appalachian cave system where she encountered unspeakable terrors. Unable to plausibly explain to the authorities what happened – or why she’s covered in her friends’ blood – Sarah is forced back to the subterranean depths to help locate her five missing companions. As the rescue party drives deeper into uncharted caverns, nightmarish visions of the recent past begin to haunt Sarah and she starts to realize the full horror and futility of the mission. Subjected to the suspicion and mistrust of the group and confronted once more by the inbred, feral and savagely ruthless Crawlers, Sarah must draw on all her inner reserves of strength and courage in a desperate final struggle for deliverance and redemption.

Terry loves Elliot. Warren loves Terry and Elliot. Elliot loves Elliot. He used to love Terry. And when Warren decides to invite Elliot along on Terry’s Satanic ritual outing, all hell breaks loose.
Now they’re lost. Terry’s unconcious. Their car won’t start. So, when Elliot and Warren see an omnipotent light, they gotta get there - but Terry must have been dragged off or something, so they have to go find her and bring her dead ass back to the goddamn car ‘cause the light’s too far to carry her.
Along the way, they encounter the frightful and ghoulish reckonings of their night’s work: Terry is neither dead nor alive, crows seem to be exploding without the aid of Alka-Seltzer, and Satan might be on hard drugs.
Can Elliot and Warren trudge the bowels of Hell to the Light of Salvation, or will they succumb to their most Satanic desires?

When a group of whale watching tourists find themselves stranded at sea on a stalled boat, their only chance of rescue comes in the form of an old whaling ship.
Not long after they board, it's clear that the crew that saved them are crazed lunatics and so begins a horrific rampage that covers the deck in blood. Each tourist finds themselves in a nightmarish battle to survive and get to dry land before the sick whalers make chum out of them.