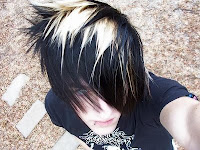 As the scientists revealed, baby boys exposed to certain plastics while in the womb are in a danger to be feminised, which means they will be less likely to play with 'traditional male toys'. They are also less into 'rough and tumble' games and instead moshing hard prefer to wear strange looking haircuts and listen to some shitty, whinning bands which are an insult to good taste.
Phthalates, chemicals used to soften many household plastics, have in recent years become a huge concern to scientists -- primarily because they mimic the effects of the female sex hormone estrogen, meaning they can have gender-bending effects. In a new study, researchers at the University of Rochester tested expecting women in their 28th week of pregnancy for traces of phthalates. They later contacted the mothers again when their children were between 4 and 7 years old.

Boys born to mothers who had had elevated levels of phthalates during pregnancy were less likely to play with "masculine" toys, like trucks and guns; instead they preferred feminized or gender-neutral toys. Previous research has linked phthalates to not-fun things such as genital defects, low sperm counts and small penis size.