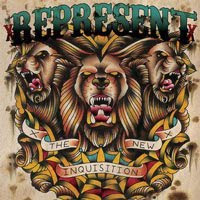 If you have a band with a name like that and the title on the cover says The New Inquisition you should basically know what to expect. XRepresentX is a type of band totally devoted to their clean and sober lifestyle and determined to get their message across.

Since the first notes on this album xRepresentx gets down to business with their no bullshit, no gimmicks brand of hardcore. Their style is straight-up raw ranging from aggressive fast parts to mid-paced grooves. Most of the beats on this album are very danceable and are sure to stir up some frantic pit action. The compositions in themselves aren't that complex but they maintain a good balance of fury, authenticity and testosterone. When it gets down to it, I don’t have anything against the bands when they use the same formula as long as they use it to create good music. I’m just letting you know xRepresentx are not the ones to experiment with the hardcore sound. It’s all about the feeling baby and you just cannot fake it. Luckily, these dudes sound pretty serious and devoted to their cause. So even if the album does no way sound original, they do have some good ideas. The band likes to throw in some metal influences now and then but you also get songs like Edgebreak, Facebreak, where pure old school grooves are dolled out with up-tempo beat and gang vocals. The production is way better than on the past material with thicker sound and a bit more punch.

The vocals itself are a take-no-shit type, spitting out straightforward lyrics filled with confidence, straight edge pride and despise for the moral degradation of today’s world. Lyricalwise, this is pretty aggressive stuff. Say what you want about the band but they aren’t shy about their beliefs and values and at least they got balls to take a stand for it.

This is overall another solid release from these guys and a record that most fans of their previous album will enjoy. They haven't made any radical changes to their music, but it all sounds more balanced and mature compared to the debut material.