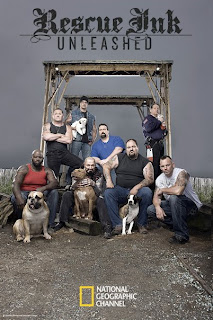 "Rescue Ink," is a new Nat Geo's reality series portraying the bunch of thugs and knuckleheads on their quest to save abused animals in NYC area. They are "seeking redemption and solace in their mission to save animals from human abuse." The group got together when they read a story about some idiot who tied a dog to a tree and set it on fire. They decided that this type of shit won't happen in their neighborhood no more. As Joe Panz told "Good Morning America, "Right then and there we decided we were not going to let this happen again with anyone doing something about it."

RESCUE INK is a rescue group unlike any you’ve seen before: a bunch of tattooed, motorcycle-riding tough guys who have joined together to fight animal cruelty, educate abusers and help resolve situations other rescue groups can’t – or won’t – handle themselves.

Some of the guys grew up in the projects, some had their brushes with the law, some used their smarts to survive, even thrive on the streets. But that was then, this is now, and today they all share a common goal: Using every means within the thin boundaries of the law, they persuade and educate abusers about the right way to treat animals.

Like many of the animals they save, the members of Rescue Ink know what it’s like to be given a second chance in life. And they’re using theirs to help the animals, no matter what it takes. 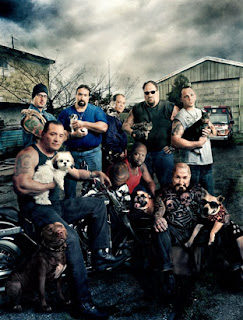