From Heartache To Hatred finally released on CD format 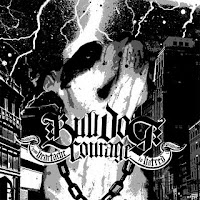 Words can't describe how I hate digital downloads so it's only right that Thorp Recs. are finally releasing one of the best hardcore albums of 2009 - From Heartache To Hatred by Bulldog Courage - on CD. Antisocial, ignorant and nihilistic, this is a type of album to give the inner thug in you a chance to break loose. Order this shit here.
Official press release:


Bulldog Courage is a fierce combination of in-your-face street punk and east coast hardcore all wrapped up in one ugly defiant package. Based out of Albany, NY, the band is not easily compared to any other punk rock or hardcore outfit around, but it's not hard to find yourself wrapped up in their world of love, loss, loyalty, heartache and hatred. After listening to the band just once, it's almost as if they have been with you all along. Their songs herald unique stories of family and friendship that burn right into you. Often described as a gritty marriage of Cock Sparrer and Blood For Blood, BULLDOG COURAGE attracts a wide interest from those who listen to music from the street; the band has an amazing ability to reach out to punk rockers, hardcore kids, skinheads and the average everyday working-class guy.

There's no shortage of fun to be had at Bulldog Courage live show either, from sing alongs to cover songs, and drinkin all night, the band surely knows how to deliver the goods all while leaving you feeling like you just got punched in the face.

For Fans Of: COCK SPARRER, BLOOD FOR BLOOD, AGNOSTIC FRONT, WISDOM IN CHAINS