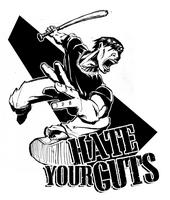 Eulogy Recordings is very proud to announce the signing of Connecticut's HATE YOUR GUTS. Their new album "BASTARD'S DISEASE" was recently recorded by Jay Silvestri and Kurt Zikaras at the Elwood Studio in Milford, CT, mixing and mastering was done by Nick Bellmore at Dexter's Lab (Hatebreed, Kingdom of Sorrow, Toxic Holocaust) in Milford, CT. "BASTARD'S DISEASE" will be released on Eulogy Recordings this summer. They will be touring full time to support the album.
Guitarist Pat Serpe commented "HATE YOUR GUTS is very excited to be working with such a prestigious record label. We have been working very hard, and are so appreciative of John and everyone at Eulogy Recordings for having us be a part of their label. We are ready to get the word out with the release of our new album "BASTARD'S DISEASE" this summer. We are going to be touring full time in support of the album to show everyone that we are working hard to fulfill the standards of Eulogy and Hardcore music. Thank you to everyone who has showed us support in the last few years."

Eulogy owner John Wylie added "HATE YOUR GUTS represents the true hardcore spirit and are
ready to take the world by storm. Dedication, hard work and an amazing album will make them a household name in no time."

Bio:
Reigning from New Haven, Connecticut, HATE YOUR GUTS do as promised. No warning, pure relentless good old fashion hardcore nihilism. Mass energy building-pissed off all-out attack. TOTAL WAR. Put on The Cro-Mags "Age Of Quarrel" record, a little Ringworm and some vintage Hatebreed in a trash bag alongside two baby wolf cubs, shake it up and there you have it. Pure East Coast HATE. Full length will be available on Eulogy Recordings in the summer 2010.
Lineup:
Rob Anderson - Vocals
Chris Loso - Drums
Pat Serpe - Guitar
Brian Coon - Bass