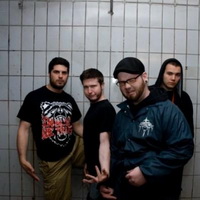 Pittsburgh heavy weight hardcore champions Unit 731 are working on new album. Haven't heard any of the new songs yet but reading what bands got to say about it, it's gonna be nothing but dope.

Here's what band posted on their myspace blog:


We began tracking our new record "res ipsa loquitur" on March 10th with Dave Piatek in Cleveland. Dave recorded and mixed our last record and we're excited to be working with him again. It's been three years since we recorded "A Plague Upon Humanity" and both Dave and us have gained valuable experience that will make this record great. We expect to finish it mid-may after it's mastered and the artwork we're awaiting is delivered. This won't be another typical beatdown record. In fact, the only thing "beatdown" about it is that it's much heavier than our first full length. Although "A Plague Upon Humanity" holds a special place in our hearts, it was our freshman effort and was created with a shifting lineup. Prepare for much faster, more aggressive songs on "res ipsa loquitur." This outcome of this record is the reason we formed this band. We can't wait to show you what we've created.

If you're wondering about the album title, this is a latin phrase literally meaning, "the thing speaks for itself." This record differs from the last not just musically, but lyrically as well. Each band member has made contributions that attain a personal level that "Plague" did not. This is literally a reflection of our thoughts and feelings on the state of the world and humanity.

Keep your eyes peeled for more information about the release in the coming weeks. Right now we're shooting for sometime in June. We'll post tracks online a few weeks before and we'll have a release show in the Western PA area. We'll probably set up a pre-order as well. - Eric and UNIT 731