To Kill is calling it quits 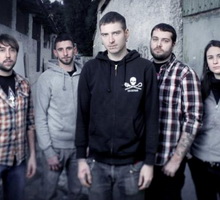 This is sad news for European hardcore community. Italian mosh commando To Kill announced they are calling it quit. The band has posted official statement at their Myspace.

ometimes in life you just get to the point where you need to move on.
To Kill has always been to us much much more than just playing and touring around, since we are truly each other’s family and we felt, as a whole, that it was time for this part of our life together to end, since our personal paths were going in other directions and we all felt we wanted to pursue other aspects of our lives.
Often you hear about bands breaking up and want to know what’s behind that, what’s the truth behind it and what’s to know in some generic statement, well this is not the case. We love each other more than ever, no one sold out, there’s no bad feeling of any sort, we just felt this was the right time for this adventure to go to an end, and for new stuff to happen to us. The bond we share will never break.

A while ago we recorded our last album “antarctica”, which we’re very proud of and is a sort of an epitaph for our band, testifying how we’ve grown together. we fucking love it! This record will be out this summer on let it burn records at a soon to be announced date and will be available at all of our upcoming shows, because YES, we’ll be playing some more shows.
Since we want to have the chance to say goodbye to all of you who made this ride the most incredible adventure in our lives so far, we’ll be anouncing soon a few shows scheduled for this fall both in Italy and around Europe. It would mean the world if you could show up, sing, sweat and mosh with us, so…let’s make it fucking epic, alright?

There would be a huge number of people to thank, so we will just thank all of you who made us feel privileged by touring and playing together the music that we love having the chance to say what we wanted to say, thanks for coming to shows, smiling, giving us a place to stay, buying a tshirt or just being nice . Thanks to all the ones involved in our band on a professional level, to all the bands we have been lucky enough to play with and to all those faces with no names which will be in our hearts forever.

You’ll know more about the record and about the final shows soon.”