Hardcore Is More Than Music 2011 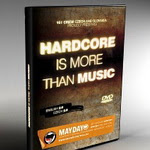 Here's the Hardcore Is More Than Music movie with guys from bands like Agnostic Front, Madball, Hoods and others talking why racism sucks and why it should not be accepted on hardcore scene.


In recent years we have been witnesses to new trends amongst neo-Nazis. Still more and more of them leave the skinhead image, and try to “catch onto” something else. One of the targets for them is the hardcore scene.

They find the aggressive music and uncompromising lyrics impressive. The leading figures of Czech neo-Nazi scene have been trying to infiltrate to hardcore shows and to take pictures with famous faces of the international hardcore scene. But they do not care about HC ethics, history or culture of hardcore. They only care about the “tough guy” image and macho poses. But that has never been what hardcore is about. People in hardcore scene differ from one another in many aspects, and that’s a good thing. But hardcore has never been connected to racism or Nazism. Hardcore community has always been a space for the people to meet without prejudice. And we want it to stay that way. That’s why we turned to some of the bands that have something to sa y. Among them were the bands whose shows attracted Nazis, who attempted to attend them. You can find the views and opinions of these bands on this DVD. Our questions remained the same, but the answers varied significantly. But they have something in common – there is no space for racism, prejudice and Nazism in the HC scene.

For us, HC scene is a family. For Nazis, it is just another scene they wish to abuse to gain support for their political goals.