Go For It! Interview 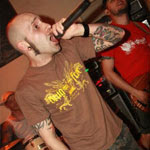 Go For It! has been featured on this website couple of times already but the news is they’re working hard to have their new album released so we thought it’s worth to inquire a little bit about it. It is called Misantrophy and judging by the songs that have been released so far, it shows more melodic and catchy side of the band. It’s still powerful, but when you compare it with their first output you might be surprised. Here’s something about the new music and the message the band want to get across through it!

Go For It! has been featured on this website couple of times already but the news is they’re working hard to have their new album released so we thought it’s worth to inquire a little bit about it. It is called Misantrophy and judging by the songs that have been released so far, it shows more melodic and catchy side of the band. It’s still powerful, but when you compare it with their first output you might be surprised. Here’s something about the new music and the message the band want to get across through it!

What´s new with the band? Please give us the recent history?
GO FOR IT! started up in late 2008 in the north-west of Germany. We´re a four-piece Hardcore-Punk-band playing a style anywhere between Oldschool & Punk Rock.
It is just the way we used to hear when we were kids until nowadays. GO FOR IT! are members Franky who is doing the vocals, Dom at the drums, Martin plays bass and my name is Haris. I play guitar and sing at several parts, too. Martin replaced our friend Sven. He was leaving out of personal reasons but he is still in our hearts and yes, he is back with making again. Martin joined GO FOR IT! in a time when we were out of the studio and the recordings for “Misanthropy” were finished. But the rehearsals with him showed us that “Misanthropy” could reach another level. So we decided to book another studio to record all bass lines again. You will hear the result when you will write the review of “Misanthropy”

Tell me about the new album “Misanthropy”. What can kids expect when they´re listening to it?
“The passion, the heart afire entire” …these are the first few words which opens up the album within a sing-along and I guess there isn´t really more to say about it hahaha. No just kidding, but I guess the first impression when I am thinking about “Misanthropy” is that this record is different in many ways when it comes to comparison to our first release “Reading between the front lines”. We invested much more time during the songwriting and pre-productions and we thrown away a lot of lyrics until we reached every single track like we thought it should out perfectly.
Finally the kids can expect 14 tracks and some really interesting features.

Tell us something about the guest appearances on the album!
Oh that´s pretty easy to answer that question because every single voice which is captured on “Misanthropy” is a friend of us. We know Cindy van der Heijden (All For Nothing) since ever I guess hahaha. And so we asked her if she wanted to sing some vocals in “Fuck Y´All”. The same with Bud who is better known from his band Settle The Score, who are sadly not active anymore. There are much more buddies on “Misanthropy” so you better check the booklet and figure out who I am talking about.
The whole “Misanthropy”-album was made by friends of us…the recordings, the mastering, the artwork and design, simply everything. That makes us feel pretty familiar to this upcoming output.

Lyrically, what are some of the stories you are telling on this album?
“Misanthropy” – dealing with social values as a flat creation of humanity. We are all creatures that act anti-social and selfish in so many ways. Franky only writes about personal stories that he witnessed cause this is the best way to make it authentic.

Which one is the most important to you?
Puh, hard to say but I guess “Humanimal” is the key to the whole album.
But that doesn´t make this song more important in contrast to the others.

You´ve been for some time already. How has your outlook on Hardcore scene changed over the years?
Damned, we´re getting older and there is nothing we can do about it. But in our hearts we´re still 14 years old and we still love what we do. But now the time has come that we give our scene(s) something back. Not something material or anything like that but we are totally caught into “messages” so maybe YOU know what we´re talking about.

Do you even get the impression that kids nowadays are forgetting their roots and the classic Hardcore sound?
Some kids are just jumping from one trend to another, play what their friends wanna hear and forget the Punk roots, which build up the Hardcore scene. Definitely yes, and I am sad about that. Today everything is about piercings, flat caps and who has more tattoos. Oh man, that really has nothing in common with Hardcore like it once was meant.

If you could change one thing in the Hardcore scene, what would it be?
One upon a time Hardcore was about being individual and diverse and checking out about the “Why?” behind a fact anyone is telling you. Today it is kinda different. The kids don´t care about respect or unity and this is what we love in Hardcore. No matter who you are, no matter where you´re from, you´re always welcome…and even more! Hardcore is a movement about being informed and to be critical.

What kind of stuff are you guys listening to now?
We´re a tree with many roots. As long as it is good music, we listen to every genre from Metal, Hip Hop, Punk, Ska, Hardcore (of course), and much more just like Johnny Cash, Peter Gabriel and City & Colour. If it comes from the heart and is authentic then I guess it doesn´t matter which style it is.

Record collecting – some kids say it´s okay, some say it´s lame to buy five different colour version of the same album. What are your thoughts on the subjects?
C´mon, you are talking about dedication and this is everything but really not lame at all. The last record I have bought was only 2 days ago. Definitely still a medium up to date in the Hardcore scene. The Rotting Out album is killer!

What are your thoughts on the current situation in Europe? I´m talking about the crises, the debt, the unemployment…
“Promote The Protest” is the connecting track to this theme and we were always treated like insects beyond the politics. We´re living in a democracy but we, the people are not involved into decisions concerning all of us. The thing is “Keep your eyes open and don´t believe what the media try to suggest you!” The big ones even earn more money than in the early days.

What are some other bands from your area, you´re down with?
Oh when I think about bands in our area then first of all our brothers Strength. Hard working, always on the road, brilliant people. Then of course, you have to check out Lavatch (these guys know how to love!) and All For Revenge from Berlin and all other bands who have something to say. Oh Berlin is not our area but hey, check them out!

Plans for spring, summer and rest of 2012? Anything else you´d like to add?
Step one: Find a passionate label who will release “Misanthropy” as soon as possible.
Step two: Promote the protest by playing shows and weekend-tours all over where it is possible and where the kids wanna see us to play.
Step three: Write new stuff. Right now we´ve already finished so far, so be aware and expect the worst.
Step four: Meet up passionate people who share the same love like we do…music from the bottom of the heart!