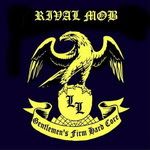 Revelation Records welcomes The Rival Mob to the roster. Look for a release from this great Boston hardcore band in the coming year. If you're unfamiliar the band: The Rival Mob was born in a bitter wasteland known as Massachusetts in the year of 2007 AD, where five men were brought together by a common goal: to play hardcore punk in a manner most hard, cold, and real. Having had a bit of experience here and there playing in bands such as Mind Eraser, Free Spirit, Mental, Rightous Jams, Thow Wrong Side, XFilesX, The Prowl, Bottom Line, New Lows, Lovely Ladsand R'N'R , it wasn't long until Boston's infamous practice space and recording spa the Pain Cave was ringing with riffs.

Inspired by late 80s hardcore a la BREAKDOWN, REST IN PIECES, YOUTH OF TODAY, and CRIPPLED YOUTH, the boys recorded their first demo (an '87 BREAKDOWN worshipping slab of meat) and started playing shows and making a name for themselves within the wonderful hardcore punk community. Not long afterwards they were approached by Boston hardcore hero and entrepreneur Greg Willmott and a deal was inked for a release on the notorious Lockin' Out label.

In late 2008 the "Raw Life" EP dropped like an atom bomb and the word was out: THE MOB ruled all. Gigs and tee shirts began to flow like wine as THE MOB continuously attacked the Northeast, Canada, and beyond. Unwavering in their style, the "Hardcore for Hardcore" EP was released in 2010 on Six Feet Under records to smashing success.

Aged like a fine wine and seasoned like a fine meal, THE RIVAL MOB return yet again for their first full-length LP on Revelation Records entitled "Mob Justice." "Mob Justice" will take the raw meat and potatoes Rival Mob formula and pump it full of caveman steroids. Not for either the faint of heart or the faint of pit - so don't say you weren't warned.