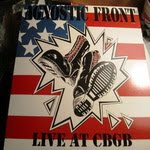 Chris Bade is working on a book which chronicles Agnostic Front's Cause For Alarm Era '85 -' 86. Author interviewed over 50 key people for the book, including all surviving members of the band from 85/'86 era. According to official Facebook page of the project, it will follow "the band from its self-booked coast to coast tour in '85 to their signing with Combat Records to their national tour with GBH in '86 and everything that happened along the way. It will also get into the New York scene at the time, which was growing bigger by the month. Metal labels began snapping up more NYHC bands. headbangers began their cautious journeys to CBGB to see the crossover bands such as AF, Cro-mags, and Leeway, and the skins were going to venues like L'Amour to see the hardcore bands that the metal clubs began booking (and to fuck up some long-haired Metalheads). The crossover/metalcore style of Agnostic Front and bands such as D.R.I. Suicidal Tendencies, and Corrosion of Conformity spread throughout the country and was the dominant style in the realm of heavy music for the rest of the '80s." The list of people Chris has interviewed so far when researching for the book looks incredible. Go to the website for more info, I just add it includes Vinnie Stigma, Rob Kabula, Jimmy Colletti (AF drummer 84/85), Alex Kinon (guitarist on Cause For Alarm, former guitarist of the band Cause For Alarm)
Gordon Ancis (former NYC Mayhem guitarist and AF guitarist for ‘86 tour), Peter Steele, Sean Taggert (artist, creator of the cover of Cause For Alarm), Paul Bearer,
Scott Ian, Dan Lilker,Evan Seinfeld, Eddie Sutton, Tommy Rat, Wendy Eager (Guillotine Zine) and many more!