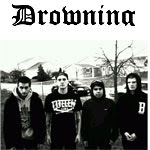 Drowning is a new Chicago-based band that delivers that sweet metallic hardcore that makes you wanna start some violence. Guys are about to drop new EP on BadAss Records and since we’re always down to support the young talent, here’s the interview with Bryan (vocals) who explains what’s the idea behind the band and what to expect from the upcoming release.

Drowning is a new Chicago-based band that delivers that sweet metallic hardcore that makes you wanna start some violence. Guys are about to drop new EP on BadAss Records and since we’re always down to support the young talent, here’s the interview with Bryan (vocals) who explains what’s the idea behind the band and what to expect from the upcoming release.

Can you introduce yourselves for our readers and let us know where you are from?
My name is Bryan Grantz and i am the vocalist of Drowning from Chicago Illinois

Let’s get right to it – your debut ep Prey For Me is due out sometime this year and many people seem to be anticipating it. What do you feel about it being ready and soon coming out?
Im really excited to get it out to everyone. We have been working very hard for a while to produce a cd that everyone can get into and hopefully relate to as well as a sound we are happy with. I can honestly say out of any band I have ever worked with this is the one that defines exactly what this group has wanted and is about. I haven't been more proud in my life. I cant wait until its available for everyone to have in there hands. 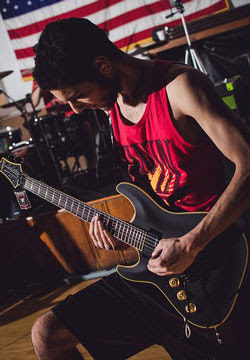 Care to give us some insight into what inspired the title – Prey For Me? What is the idea and concept behind the EP lyrically?
What inspired the title was society in general. Not many people can grasp or understand where we or musicians in general come from. They dont understand what the music really means or the lifestyle. So it was somewhat of a shout out to that. We are also very influenced by politics. In that sense speaking how from a revolution stand point the government needs to be prey for the people. There is so much wrong in the world and we cant change anything unless we take it upon ourselves to do so. We cant trust any political leader or government. The only people we can trust are ourselves. As far as the lyrics go we have a wide range of topics we talk about. Most being of politics. We want to give people the idea to start thinking for themselves. If we cant accomplish that at least we put the idea in the back of their head where they could always come back to it. Our number one is to have people question authority and ask why instead of getting force fed reality and being fine with how things are. The other few tracks which dont talk about politics are about life and emotions. How you feel in your darker days. I wrote the songs instantly while I was going through some of the hardest times of my life. Its raw real emotion. No games or gimmicks.

The songs from you I heard so far are fucking heavy but still more hardcore than metal. Who are your strongest musical influences?
We have a wide range of influences. We try to create our own sound but here are some of the names to throw out are Bulldoze, No Retreat, Abnormity, Circle Of Dead Children, Slipknot, No Warning, Taste The Steel and Icepick. 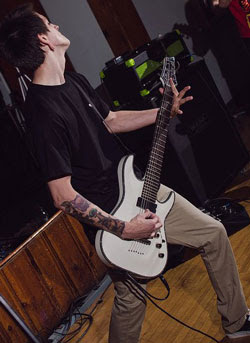 Tell us about guest appearances at the album? How did they come into the recording process?
Tito Fury(Surge Of Fury),Damien Basham(Our old vocalist from Drowning) Tyler Tumminaro(Bitter Thoughts) Nick Arthur(Molotov Solution) Romel Pinnix(Southend)will all be on our cd. Damien,Tyler,and Romel are all homies of ours from the Chicago Hardcore scene. We feel they all have distinct voices we wanted to put on our cd. Nick and Tito were just two that we have met through our music which we also wanted to add on our cd for the same reason. All five are awesome dudes and we couldn't be more excited that they are a part of this.

How did you hook up with BadAss Recs for the release?
We were looking for a label to help put out our next cd and I asked a mutual friend about them(Gerardo Pavon from No Zodiac). I heard nothing but good things so I messaged him to talk about everything. He knew who we were and liked our music so from there everything worked out and here we are today. Badass Recs is a very hard working label and we couldn't be happier being a part of it. Lookout for other releases from them as well!

What’s the driving force behind the band? What do you want listeners to be able to pull from your music in particular?
The driving force behind the band is everything we feel/believe in. We dont just write for fun or to take you to a imaginary world. This is real life. If we haven't felt it or went through it. We dont write about it. This is real music for real people. A term I always use is "Real Recognizes Real" which I quote from the Icepick song. We let the listeners pull whatever they want from it. If they can relate or feel how we felt. That is a mission accomplished.

And what has been the most unexpected part of your experience in this band?
All the support we have gotten from everyone. When we started this band is wasn't ment to be as serious. We were just five dudes that wanted to play some real music. As time went on we felt we could make a difference and we are using it to our advantage not taking it for granted.

Any last words?
I would like to say thank you to everyone for the ongoing support. Its not taken for granted. Shout out to our homies from Headshot,Surge Of Fury,Southend,Empire Of Rats,Stab Twist Pull,Bitter Thoughts,No Zodiac,War Hound, Desolated, Corruptor and last but not least Badass Records!