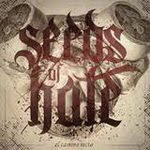 Seeds Of Hate from Barcelona rips through 11 tracks of hardcore that got some crossover feel to it, but is served with a modern twist not unlike First Blood or Kingdom. The album is filled with mostly up-tempo and fast jams with some mid-paced slower parts now and there. Just like the Sin Permiso Sin Perdón a pretty decent track which stands out due to nicely laid groove that culminates in a massive stomping part. This is how it should be done! Other song that kicks ass is Más Fuerte Que Ayer, which has some memorable riffing but I can’t understand why they didn’t finish it after 2-3 minutes, instead of carrying it for over 4 minutes?

That long passages create too much distraction in my opinion. My point is, this type of hardcore is best played short, but some songs on El Camino Recto drag on for far too long and most of the impact is wasted. I think that’s my biggest issue with the album. Hardcore should feel like having a pound-for-pound brawl with Mike Tyson, not like discussing fashion with Kanye West.

The shouting vocals take some time to get used to, but they’re ok in the end if you don’t mind this style. They sound too loud in the mix though.

I can’t understand a word they sing but even if I wanted to use Google translator to check what they’re so angry about, the font used in the inlay artwork makes it impossible to read the lyrics. It’s not a big issue and I am pretty sure most of you wouldn’t bother to try to read the lyrics anyway, but even if you did the task might be challenging. But I gotta say it, big props for singing in Spanish. Great, powerful language for hardcore.

Other than the font, the artwork is slick and very nicely put together.

Overall, this is pretty decent album and you can feel the band put some effort into these songs. I know a lot of people are into this band and I admit they know how to handle their shit, I just wished the album had more force and substance.