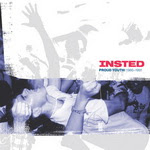 From label's website: "Unbroken "Discography" 3xLP on Red vinyl is now available on our online store. Additionally there is a green vinyl pressing that Unbroken took with them to Europe that is now available in very limited quantity. These are the leftovers and there's not many so if you want one, order soon."

"Although we haven't been particularly prolific the last year or two we do have some other releases that we are currently working on."

"First up will be a small pressing of Strife's 1991 Demo on 7". This release will mark the 20 year anniversary of the label and it only makes sense to do something with the band that helped to start this whole thing. Expect that sometime later this summer."

"We are currently working on a 2xLP vinyl discography for OC's late and great, Headfirst. It will include all their recorded output including both their original demo tapes. We're looking to have that out by early summer."

"Lastly, we will have a vinyl version of the Insted discography out this year as well. It will include everything that was on the CD release as well as a digital copy of the release and a video documentary."