Still Screaming - Stick At Nothing 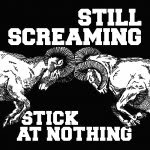 Stick At Nothing is another release by Still Screaming, a band that I have been following for some time already and really dug their previous releases. The music on this mini album is still along the lines of the classic NYHC style and the band sounds pretty confident in this area. Think of classic Agnostic Front albums or European bands like Only Attitude Counts and you’ll get the idea what it is about. Nothing is forced, all the songs flow like they should with nice vibe and catchy hooks. It’s even better than their previous outputs, which were really decent already. Now it’s all taken to the next level. The delivery is sharper, the songs more on point and focused. Thankfully, just because the band is getting better at their craft does not mean they start to use any fancy stuff. It’s still in your face as it should be.

No Excuse is the strongest point on this album, with a thrash-like feel in the fast part and crushing breakdown at the end. That’s a type of shit I wanna hear more from them. On the other hand, tracks like Alone show they still can sound good when bringing more groove into their sound.

This is pretty decent release if you’re fan of such style. With bands like this, things look good in Europe right now!