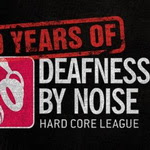 New album will be presented on the 1st of December at the European Hardcore Party, more info soon!The band has been around since early 1991 and has played almost 500 shows around Europe as a headliners or supported the bands like Suicidal Tendencies,Sick of it All, Rise Against, Madball and much more.

This year, Deafness By Noise celebrate their 20th anniversary with the new double album “Noize Deaf Forever / Roots Baby Roots ” recorded at Stage One Studio in Germany and produced by Andy Classen, known for his work with Rykers, Holy Moses, Dew-Scented, Tankard and Brightside to name a few. Members from Rykers & Brightside also feature as guests on this great record.

With the international hardcore scene on the rise and the band’s history in Europe, Deafness By Noise is a force to be recognized and respected.

“Noize Deaf Forever / Roots Baby Roots ” is an outstanding record and will for sure please anyone looking for straight up hardcore rock`n`roll.