Watch Your Back Interview 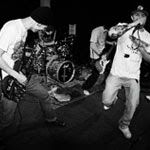 Watch Your Back is band from Finland that brings some hard-hitting hardcore with balls and attitude. All across there are kids that can’t take a joke so I appreciate when some dudes bring that ‘don’t give a fuck’ mindset to the game. It’s not a joke band though, they also sing about some serious shit as well so the ‘message’ element is still here. Anyway, read the interview.

Watch Your Back is band from Finland that brings some hard-hitting hardcore with balls and attitude. All across there are kids that can’t take a joke so I appreciate when some dudes bring that ‘don’t give a fuck’ mindset to the game. It’s not a joke band though, they also sing about some serious shit as well so the ‘message’ element is still here. Anyway, read the interview.

Let’s start with some basic info about the band. How, when and why did Watch Your Beck get started? Who came up with the name?
Olli and Kimi were talking in 2006 about starting a new band. Luckily they ended up once again getting drunk with this weirdo called Tommi after a Cro-Mags gig, who managed to tell them that he played guitar and was actually willing to join the project. It took fucking long before anything actually happened, but eventually the band rehearsed for the first time some 6 months after this drunken chatter. Riku joined the band in 2009 and completed the line-up.
Nobody really remembers who came up with the name, but according to the folklore it might have something to do with the Cock Sparrer song “Watch Your Back”.

Tell us something about the new EP, Last Man Standing? What kids should expect from it and has your drummer finally learned how to play?
First of all, kids should not listen to it (ha ha). It’s nine songs in ten minutes with no breakdowns, gang vocals or sing-alongs, just straightforward and insanely fast hardcore. Two or three guitar solos that last some 10 seconds combined. Our drummer is as lousy as ever, but plays even faster than before.

What the Guilty as Sin track is about?
Tommi: It's about the fascist ideas some people and groups are trying to advocate. I guess you could get it the wrong way pretty easily haha. The song title has nothing to do with the lyrics by the way.

You put out all your music by yourself. Why is that? Is it difficult to release your shit DIY and get it out there to the masses?
We never tend to speak with anyone, so actually getting a label to publish our shit has been quite difficult. Yes it is hard work and endless hours, but its worth it (kind of). Needless to say publishing DIY costs more, but we have never really expected to make any profit with this band. But we’re happy that people have been at least a little excited about the record and we’ve been able to get rid of most of the 7”s already. 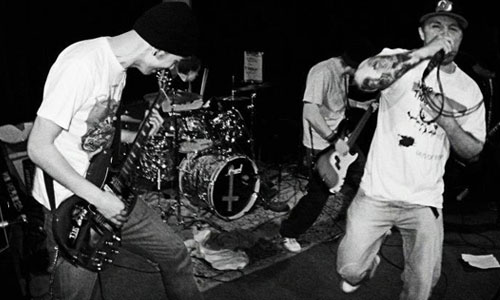 I think hardcore is getting just better and more exciting in 2012 with tons of bands and kids that know what’s up. What’s your opinion of current state of hardcore?
Jaffa: I think that there are a lot of good bands these days, but only a few ones that actually blow your mind. One could argue that everything’s been done already, but I don’t know, I always end up listening to SHEER TERROR.
Tommi: I'm going to Ieperfest in Belgium this summer to see new and upcoming hc bands such as AGNOSTIC FRONT, SICK OF IT ALL, 7 SECONDS, HELLBASTARD, CORROSION OF CONFORMITY. Also looking forward to see the reaction in kids´ faces as EYEHATEGOD go thru their hits like "White Nigger" and "Sister Fucker".

Somehow most of the kids I know from places like Finland or Sweden are very politically active and always be fighting for some cause. How is that and why your folks hate capitalism so much?
It’s more a Swedish thing, I guess. The Finnish hardcore scene is more about kids being pissed off by everyday stuff, not so much about politics. I don’t know if people in Scandinavia really hate capitalism, but if it seems like it, it might be because we’ve never faced communism or any real oppression.

Favorite One Life Crew song?
Tommi: Murdario Stomp/Pure Disgust. To me, "Crime Ridden.." is the best hardcore record of the 90´s.

Jaffa: Crime Ridden Society is of course awesome, but aside that I’ve always loved “On The Cuff”

What can we expect from Watch Your Back next?
Our drummer Lauri is leaving to Japan for a year, so I guess we’ll have at least two big tours in Japan in the next 12 months (haha). Seriously, we were prepared for a hiatus, but Pate (one of the guys who recorded LMS) told he could fill in for Lauri, so maybe we have to keep playing this shit after all. So expect another fuckin´ EP in two years.
There has also been talk about a few gigs in Belgium and Holland in 2013. We’re excited and frightened by this because we hit the bottle pretty hard during these short tours.