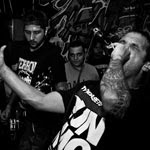 I know many kids are so focused on American or European hardcore that they barely can name 3 bands from outside these scenes but if you’re one of them, you’re seriously missing out. And most definitely, if you don’t know any bands from South America, you gotta do your homework cause they got some crazy scene over there. Clearview reps Brazil and is example of a band that knows what’s up when it comes to that gritty and powerful hardcore sound that takes the vibe of the classics NYHC acts but puts its own spin on it. The band has dropped their new album, Pure Mayhem, couple of months ago so make sure you check it out!

I know many kids are so focused on American or European hardcore that they barely can name 3 bands from outside these scenes but if you’re one of them, you’re seriously missing out. And most definitely, if you don’t know any bands from South America, you gotta do your homework cause they got some crazy scene over there. Clearview reps Brazil and is example of a band that knows what’s up when it comes to that gritty and powerful hardcore sound that takes the vibe of the classics NYHC acts but puts its own spin on it. The band has dropped their new album, Pure Mayhem, couple of months ago so make sure you check it out!

Would you like to introduce yourselves to the readers who may not have heard of Clearview, as well as a brief history?
A: First of all, thank you so much for spending your time thinking about these questions! Definitely you readers will know a little bit more about Clearview and my craziness haha. Well, We are Clearview from Sao Paulo - Brazil. We've been around trying to spread terror waves through our music since November 2002 and we have no signal of stopping this locomotive.

You released your latest album Pure Mayhem couple of months ago and the kid’s reaction to it was pretty dope. Many people seemed to be feeling it. Are you happy with the way it came out and how it was received?
A: Pure Mayhem definitly came out in the right time for us. We put a lot of effort and sweat. My good friend Nick Jett who plays drums for Terror (USA), flew down to Brazil and managed the whole thing. Words couldn't be described. First of all, we recorded what we liked and also the process of recording was pretty much fun. We partied a lot in Sao Paulo, got crazy everyday so when we were in the studio, things worked so smooth cuz we were in the same vibe.

There is a great sense of anger and passion throughout the album. What are some of the things you try to communicate through your music?
A: Music and lyrics are part of our routine in Sao Paulo. We wake up early go to work, we see a lot of losers around, murders and all those wildness that you only can see if you really live in a big city. We try to canalize our rage against this world and push ourselves far from all this negative that we see around.

What was it about the hardcore scene that initially attracted you to it and what do both the music and lifestyle mean to you?
A: I started listening to 'agressive' music around 1988 when i got my first skateboard. I always believed that skateboarding and punk are side by side. My older cousins were so into punk and thrash music. I was kinda inspired by them. So when you are too young, everything is new for you, i remember my first sepultura and ratos de porao shirt when i was around 12/13 yrs old. About hardcore scene, it's like a parallel universe. i was attracted because i saw how people were interacting and sharing ideas, so i was like "i wanna be part of it, this is the place that i wanna be!".

So I wonder what do you think about the state of hardcore nowadays? Is it going in a right direction?
A: hardcore nowadays are coming back for the streets. im talking about what i see in my country. I mean, lot of things got better but in the same time what was pure and beautiful changed to ugly and corrupted. when things start working, u can see a lotta rats around trying to take advantage of those who have been around suffering and sweating to build up a solid scene. 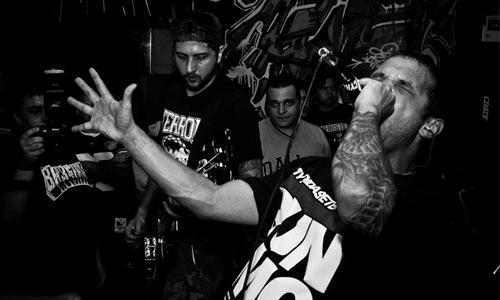 What, for you, is the best example of good hardcore album? The epitome of what this music and lifestyle is about?
A: There's nothing in this earth or universe as the masterpiece made by youth of today. WE ARE NOT IN THIS ALONE is the best hardcore album in my humble opinion.

How do you feel about the way Brazil hardcore has recently been represented? How do you feel about the new bands that are currently active in this area? What about the rest of South America? Which countries have some strong scenes?
A: well, bands in brazil are going crazy! if you look back to the 90's definitely it was so hard to start a band. Nowadays it's so much easier, you have studios that you can write your own thing, good musicians around. One of the biggest problems with Brazil is the lack of good venues with decent prices. The majority venues only care about how much profit they will make. We know that they've got bills to be paid but asking fortune to throw gigs definitely is not a good idea. There are some great Brazilian hardcore bands as Paura, Questions, Still Strong, Ralph Macchio, One true reason, Yourfall, Final Round, Bayside kings, Presto?, Bandanos...

Most of our readers are from Europe and States, so I believe they don’t have a clear vision about what living in Brazil is like. Most people associate Brazil with various social and environmental issues, but on the other hand I read articles that things are starting to look better over there. Can you tell us something about it?
A: things over here are pretty crazy. I live in Sao Paulo, we are one of the sixth biggest city worldwide, there are more than 30 million people living here. Sao Paulo’s nightlife is amazing 24/7 services and all kinds of craziness around. when we talk about politics, its all about rats! they steal our money making taxes to be paid but in our backs they are spending our money with no limits! People are too passive, they only care about their own shit, their own comfort zone this is so wrong, but everyone is free to make choices. I made mine.

You have some very interesting tattoos, which piece is your favorite and what is significance of it to you.
A: my tattoos are some wild ideas that i brought to my tattoo artist! Hahaha I like everything that i got! sometimes people hate their things, but i'm very happy with what i chose for me. haha

Any last words for the readers? Anything you want to get off your chest?
A: for you readers, check our stuff on Facebook and Bandcamp
if you wanna see some crazyness, follow me on isntagram: RICKNP
Get off the internet and support your local scene, bands and record labels!!!
Respect each other no matter what.
the world is big, be cool fellows.. #NP4L #LOC