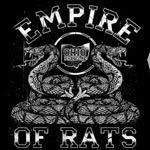 If you got any taste in hardcore you must have heard about Empire Of Rats and its debut No Peace ep, a thrash-infused monster that makes most of your favorite bands sound like pussies. On top of it, the Columbus, Ohio band got veterans from bands like Pitboss 2000 and Under One Flag. Can it get any better than this? Here’s a short interview with the band!

If you got any taste in hardcore you must have heard about Empire Of Rats and its debut No Peace ep, a thrash-infused monster that makes most of your favorite bands sound like pussies. On top of it, the Columbus, Ohio band got veterans from bands like Pitboss 2000 and Under One Flag. Can it get any better than this? Here’s a short interview with the band!

The band played This Is Hardcore 2012 – how did it go and what was crowd reaction you got?
It went great actually. We couldn't of ask for a better response being that we've only been a band for little over a year and only had 10 shows under our belt. A lot of positive feed back.

For those unfamiliar with Empire Of Rats - what do you want people to know about the band and your music?
There's really not any kind of message or anything like that that we're trying to get out. Probably like any other hardcore band, we're trying to have fun with it all while letting out a little frustration the world brings to us haha.
Can you break down for our readers the meaning behind you name – Empire of Rats?
We live in an empire that is ran by rats. I try to keep a lot of political views out of our lyrics because no one ever really wants to hear that shit...even me.

I must admit I am feeling the No Peace ep. What's the general response been like to this release?
It's been pretty good especially since we wrote that ep in the matter of a few months and it was really only meant for a studio project initially. Bit we're glad it went over the way it did.

Who were your strongest musical influences when writing this stuff?
Man, we all listen to so much different stuff. I would say any old thrash and a very little bit of hardcore. I would help with some of the guitar parts and listen to a lot of Carnivore at the time so that was a big influence.

Songs like We're Dead or Still Out of Breath are heavy hitters lyrically. Is there any message you are trying to send through your music?
Not really. Just a lot of venting frustrations since we can't legally kill the general public.

Listening to these tracks it give a bleak, negative image of life. What is it about the world today that pisses you the most?
The general public haha. Just turn on the news every night at 11 and I assure you you'll have some kind of inspiration. 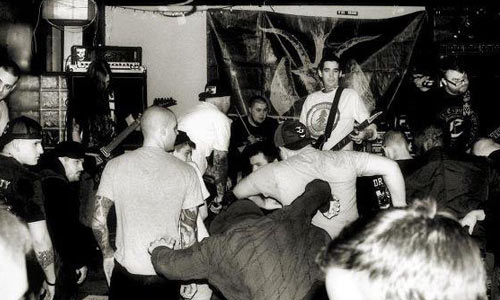 What’s your outlook on the future? Sometime it’s hard to be positive seeing all the problems people have to face today.
There's really no hope. And I know thats beating a dead horse with that line but it's true. You can scream and scream till the cows come home about this person needs to be in office and that person needs to be elected but those people don't give a fuck about you or me at the end of the day.

Some of you’ve been in some of the noblest bands in hardcore – Under One Flag and Pitboss. I always wondered what was the reason both of them disbanded? Especially Under One Flag, which put out really tight album, Red, and disappeared soon after…
That band was around for nearly 10 years. We started that band when the whole "posi" thing was big and right after pb2k was done. We tried to make a "fun" band but it just wasn't working out after all those years and got a little darker with the lyrics but it just didn't feel right with the music.

Remembering the mayhem that OLC and Pitboss caused back in the days, you guys feel that hardcore sometimes gets too soft? Like, people get offended so easily, like in case of Agitator having to cancel their tour in Europe.
Yeah it gets a little ridiculous really. I remember not being able to go certain places with pb2k because people thought we were nazis. All because of some lyrics about Bill Clinton. It's not nearly as bad now as it was back then but you still see a bit of softness in hardcore.

Being in the scene for years, how would you say it has changed since you got involved up until now?
I've seen the hardcore scene change and go through so many phases since 95/95. It was very segregated back then. Like if you weren't sxe back then, you wasnt shit. Now days no one really cares about that kind of stuff.

How is the scene in Columbus, Ohio nowadays?
Off and on. That's the only thing I can really say about that.

Tell us what you have coming up that we can check for. Plans, gigs and releases planned for the upcoming months?
We're gonna be locked in a room finishing up our full length coming out on A389. Just a hand full of shows up north and out east here and there for the next few months.

Any closing thoughts?
Eat meat, smoke weed, drink booze, stay straightedge, stay true to whatever you do! Thanks for the interview. Peace out, I'm going to bed!