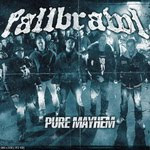 Hate it or love it, Fallbrawl is as German beatdown as it gets. Guys from over there had always their own take on this genre which emphasized heaviness over everything else. Cannot say I am the biggest fan, but I don’t mind couple of bands of this style. In recent years Fallbrawl has emerged as the leading posse doing this shit and basically a band to go to when you feel the urge for that type of sound.

Pure Mayhem is the latest release by Fallbrawl and it rages with violence and revenge. Right off the bat you’ll notice that the band really took its time in the studio to make sure it sounds heavy and crisp. Musically, you got all the ingredients that make for a solid beatdown album. Crushing breakdowns, heavy-ass riffs and double bass action is something that carries the listener throughout Pure Mayhem. The beats are hard and the band obviously feel at ease with their sound.

The songs are well crafted, but not anything that is particularly elevated. The album has lots of solid cuts, but the one I dig the most are the ones where band strays away from usual German beatdown sound and bring more dynamic vibe to their game. Stone Cold is one example, with strong guitar work, solid hooks and hints of melody. The lowest point on the album may be the rapping parts. While they’re in German so I can’t comment on the skills, they add totally nothing to these songs and just interrupt the flow of the album. Luckily, they’re few and far between.

The bottom line is that this album is solid and there is plenty on it to like if you’re into beatdown bands like Nasty or Embraced By Hatred. Not every album can be a classic but this is a well constructed music and probably one of the best in their league.