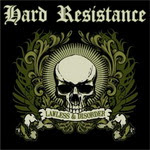 The fact that this album is getting such a good feedback from the hardcore crowds proves that we’re living in a good times for hardcore. I can imagine just couple of years ago when the scene was infected by that metalcore crap it wouldn’t get so much love. But that days are gone and hardcore is getting its shit together again. If you got even slight idea about European hardcore from the 90’ there’s a huge chance you heard about this band.

I’ll spare you all the history how they were putting albums back in the days when eurocore was a trend and then laid low for couple of years during which hardcore got intellectual and the trend was mainly ridiculed. I remember I had mixed feelings about a lot of the bands on Lost & Found label. Yeah, I liked Rykers and Backfire, but there were also many bands I wasn’t into. Hard Resistance fell into the first category, though I was mainly familiar with their Engine Of Hate album which had its moments.

But that was then and this is now – fast forward to 2012 and Lawless & Disorder comes out. Compared to their older albums, the first thing that hit me is more metal influences in their sound. The music got a little heavier, more thrashy, but still within some reasonable limits. You can still hear the core elements of band’s sound – it’s raw, rugged and full in your face aggression. The first songs kicks in and they don’t waste no time for bullshit. The tempos are breakneck from the start and the combination of pissed off vocals and raging guitars makes for a deadly outcome. It’s 12 songs in less than 22 minutes, which should tell you something.

Reading the lyrics it’s good to see they didn’t lose the bite and still have a long list of things that pisses them off. It’s more constructive and thought out now, offering some deeper views about the state of the society and world today. They touch upon variety of topics, like corrupted politicians, everyday struggles, ignorant and numb society, war and greed, but it doesn’t sound PC or preachy but rather as a sober analysis of the current state of affairs.

All in all, a strong album by these veterans.