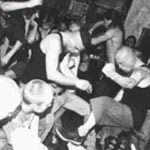 If you were around in the 90’ and knew anything about the hardcore scene, you must have came across the thing called streetcore or eurocore which simply meant raw and harsh hardcore with strong NYHC influences and working class mindset. These were the good old days when shaved head and army camouflage shorts was the most stylish thing hardcore kids could think of. Hard Resistance were one of the major names in this genre and with album titles like Engine of Hate or Psycho Tales you bet it was great stuff. After the band took a break for couple of years, they got their shit together recently, released new album and started playing shows again. Here’s the interview so you know what’s up with the band nowadays!

If you were around in the 90’ and knew anything about the hardcore scene, you must have came across the thing called streetcore or eurocore which simply meant raw and harsh hardcore with strong NYHC influences and working class mindset. These were the good old days when shaved head and army camouflage shorts was the most stylish thing hardcore kids could think of. Hard Resistance were one of the major names in this genre and with album titles like Engine of Hate or Psycho Tales you bet it was great stuff. After the band took a break for couple of years, they got their shit together recently, released new album and started playing shows again. Here’s the interview so you know what’s up with the band nowadays!

The first question would have to be, where have you guys been for the past few years? Why did you know now was a right moment for a comeback?
(RON): First of all the band quit after being active for about 8 years in February 2002. Everyone expected us to release a third full album. Instead, the band broke up. In 2008 we started playing reunion shows. After playing about 15 shows in Belgium, Holland and Germany the idea was brought up to start writing new song material. I guess that was the moment the real come back was a fact.

Can you give us a little background on the new album and what the concept is behind it?
(RON): "Lawless & Disorder" is about the current world we live in. It's our assault against the government's, politics, religion, modern slavery…We never had the intention of writing a so called 'concept album'. It just grew during the writing process to become one. At the end the album turned out to be the perfect soundtrack for this present time.

How have your sound and influences changed compared to the previous albums? The first thing that hit me is that the new songs seem to sound way heavier.
(RON): Yes indeed, this album sounds a lot more heavy than any of the records we have done before. We grew up during the late eighties listening to bands such as DRI, Suicidal Tendencies, SOD, Cryptic Slaughter, Spermbirds … With this album, we bring back that style of hardcore music that has been disappeared from the scene trough out the last years. I guess it is pretty safe to say Lawless & Disorder is an 80's hardcore record made by a 90's hardcore band together with a modern day hardcore sound.

One of the main themes on the album is political and social issues which are happening right now – what is your opinion about the current turmoil in Europe? How do you feel about how things are going right now?
(RON): Well it is clear to see times are changing… for the worse! (JOEL): It proves that the current political- and economic system is a 'system fail'. It needs a new and better approach. Just watch the news or read a daily newspaper, it's not normal what's happening. We have tried to translate the harsh reality in our music, that's our way to express ourselves...

In your opinion, how will it end, if it ever ends? What’s your outlook on the future?
(RON): I don’t think anyone can tell how or when this will end. In my opinion, this current crisis is only the beginning of something that will last for years to come… sad …

When the vinyl version of the album is going to drop? Which label gonna take care of it?
(JOEL): The date is set for december 1st. It will be released by Strength Records. It's something special, it's the first time ever that we release a full album on vinyl.

You’ve been around for some time now. What was it about hardcore that appealed to you in the first place?
(RON): Most of us discovered about hardcore music in the mid/late 80's. The hardcore scene was completely underground in those days, no internet… One had be very inventive to get information about bands, gigs. We spent many hours in the record stores looking for hardcore records from all over the world. We were completely into this fast hard hitting music with pissed off angry vocals.

What’s the best memory of being part of hardcore in the 90’? Is there anything from the old days that you miss?
(RON): Now that’s a tough one 'cause we might just have like a million good memories about these days!! All of a sudden young bands as ourselves got record deals and went on tour with bands as Sick of it all, Madball, 25 ta life, Slapshot. This was new, not seen before. More and more people got involved and started new bands. The scene got really big all over Europe. A lot of people showed up at the gigs,… times were good.

Since you’ve been away, the landscape of the hardcore scene has changed. What do you think about the current state of it?
(JOEL): There is more diversity now. A lot of bands bring a mixture of metal, hardcore and even death metal influences. That's the 'present' sound. Everyone has his style and influence and you can hear that in music. Music evolves and changes constantly. Some people claim that oldschool hardcore is dead. But on the other hand, there are still lots of hardcore shows. It's really good that there are still bands around like Backfire!, Punishable Act, No Turning Back and Tech 9. They keep this scene alive.

When you play shows, is it mostly new faces, or do old timers also come?
(JOEL): It depends where we play. At each show are still a handful of the older guys that saw us in the 90's. So we see a lot of new people, which is good. The older guys and the new people like the new album and the comments are great.

Do you like any of the recent bands? Any in particular that you support or don’t support?
(JOEL): Off course, there are so many great bands, ... All For Nothing, Walls Of Jericho, Suicide Silence, Bluntforce Trauma, Hoods, ... to only name a few...

You started writing new songs already. What kids should expect from Hard Resistance in the future?
(RON): Yes indeed, at the end of this year we’ll hit the studio again to record new songs which are being written as we speak! To be released as MCD or 7" early 2013! Besides that were gonna play as many shows as possible all over Europe and start working on a new full length album. So stay tuned!

Thanks for your time. Any last words or shout outs?
(RON/ JOEL): Thank you for the interview and your support! To all you rebels out there, come to one of our shows and visit our facebook and website for all information about gigs, releases and other news. Cheers and see you guys soon!!!