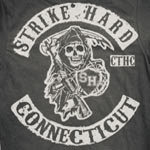 Strike Hard has Just released new album called Prophecies which has an interesting lyrical concept to it, dealing with falling on hard times and trying to survive the worst. Joe, band’s bassist, gives more in-depth reflection on the album. It has already been released so go and check it!

Strike Hard has Just released new album called Prophecies which has an interesting lyrical concept to it, dealing with falling on hard times and trying to survive the worst. Joe, band’s bassist, gives more in-depth reflection on the album. It has already been released so go and check it!

It’s been a while since we spoke. What’s been going on with Strike Hard lately?
Starting in January of this year, we decided it was time to start putting together a follow-up record to “Jawbreaker”. During this time, we’ve been taking a break from playing as many shows so we can focus our efforts into making this CD sound tight. Production concluded in June and we began promotion and printing physical copies of “Prophecies” shortly after. More recently, we have begun lining up shows again, doing weekend tours and printing merch in preparation for the release of the album.

So let’s get right to it - tell us something about Prophecies? What brought about the name?
“Prophecies” is different from our previous album in that this CD is based around a central concept. The story follows an unnamed person who is seeing their life crumble before their eyes - going through mixed emotions of denial, anger, depression and recklessness while the rest of the population just watches as the world burns. It’s an interesting perception from someone who is aware of their ultimate fate and in the end comes to the realization that nothing they can do will change that. The title “Prophecies” derives from their awakening to the impending devastation that awaits mankind. 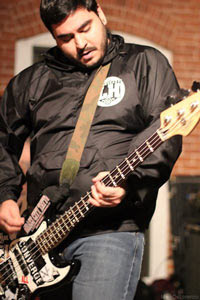 Can you describe the sound of the album? What was your main goal when writing new music?
Our goals for this album were to continuously progress as a band, challenge ourselves and combine all of our collective influences, as well as many different styles of hardcore. The style of each song varies from original hardcore verses, melodic choruses and heavy breakdowns. We wanted something that was going to be punchy and in your face while staying true to our roots. In the end, we ended up with a CD that was much faster, more melodic and more diverse than anything we have ever written. As time passes, we start to learn more about our sound and what defines us.

Tell us something about the guest appearances on the album?
We were really stoked to have the opportunity to work with 4 guest vocalists from some great bands. All of the choices we made were based on bands that we’ve played with live and have become friends with. Basically, each guest’s vocals were paired up with a particular song from the album to best match their style. On the title track “Prophecies”, we have Sean Murphy of Endwell. Nico DelGiudice from Like Beasts performed on the track “Barricade”. Keith Holuk of Ligeia did the chorus of “Exiled”, and Jeff Higgins of Anchorlines was featured on “Eleventh Hour”.

What is your label situation? Who is going to release the new album?
Well as of right now we don’t have a label. We’re doing this release completely DIY. Once the record is out we are going to start shopping around for a label to put out future releases. We are planning a split 7” early 2013, hopefully we have a label to put that one out for us.