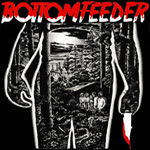 It seems that the sole purpose of Bottomfeeder’s existence is to bring the glorious style of 90’ tough metallic hardcore back on the map. No band can go wrong when taking Merauder, All Out War or Earth Crisis as their musical influences, and Bottomfeeder executes this style for perfection. If you mix it with hard-hitting lyrics that jump from personal issues to more global concerns, it’s an ultimate killer. This interview is for those who dig band’s latest output, II ep, as well as for those not familiar.

It seems that the sole purpose of Bottomfeeder’s existence is to bring the glorious style of 90’ tough metallic hardcore back on the map. No band can go wrong when taking Merauder, All Out War or Earth Crisis as their musical influences, and Bottomfeeder executes this style for perfection. If you mix it with hard-hitting lyrics that jump from personal issues to more global concerns, it’s an ultimate killer. This interview is for those who dig band’s latest output, II ep, as well as for those not familiar.

Tell us something about how Bottomfeeder got started? Did you have any aspirations or goals when this band started?
We started in the August of 2010. The first practice was just myself, Kevin (guitars), and Vince (drums). Those two were in another band called Dead And Buried and had broken up a few months prior. They were sitting on a few songs that would have been apart of the next D&B record and instead of trying to drag that name through the dirt with a total lineup makeover, they decided to not waste these songs and start something new. They hit me up after hearing that I was looking to start something up. It was about a month or two into the project that Joe (bass) came along. He heard about what we were doing and that we were looking for a bassist. He originally joined with the notion that he didn't know how long he could commit due to his relatively active death metal band. Here we are two years later and he's still thrashing with us. Len (guitars) came last. He actually recorded our demo and was the first person outside of the band to hear the material. During the studio session, he said that if we moved our practice space a little closer to where he lived, he was joining the band. He wasn't giving us an option on that. Haha. The lineup has been the same since with the exception of a few shows this past summer that Pat from Swashbuckle help us out on guitars.

As far as aspirations. I think the main goal is to have fun. We all have full time jobs so serious touring is never going to happen for us. This is more of a hobby that we're taking pretty serious. We all have a passion for music and want to put out material that we're proud of. The only "big" goal we have is to make it overseas. Most of my band members have been playing in active bands for over 10 years but none of us have had the opportunity to play overseas. Right now though we're enjoying playing the area and occassionally traveling out to play weekend warrior.

Which part of Delaware are you from? What’s the scene like out there at the moment?
The band started out in Newark Delaware. As far as the scene in Delaware, it's relatively dead in terms of hardcore. Us and Doubledealer are the only bands that I'm really familiar with that are flying the Delaware flag. The funny thing is 3/5's of Bottomfeeder isn't even from the state. Myself and Joe live in Southeast Pennsylvania and Len lives near Trenton, NJ.

Even with those there seems to be a lack of bands coming from the first state anymore, there are quite a few decent venues that put on solid shows. We've been fortunate enough to play our "home" state a few times and everytime has been alot of fun.

The II ep has been praised by many for its throwback metalcore sounds bringing the feel of classic All Out War or Merauder albums. Is that a fair statement and how do you feel about these comparisons?
That's kind of what we were going for. No one does that type of metallic hardcore anymore. Everything that is labeled "metalcore" these days is cookie cutter and almost comes like pop-music with distortion. In my mind, the late 90's era hardcore was the best. Bands like Earth Crisis, Ringworm, Merauder, and All Out War were doing things the right way. With the exception of a band here or there, that style is almost dead. I think it's time for a revival of that sound.

As for how I feel about the comparisons, it's truely mindblowing. Hearing the compliment of us being the "next All Out War", while I think we're not necessarily worthy of that title, is a true honor. It's kind of surreal hearing our name and their's in the same breath. I would love to know how they feel about it. Hopefully they give us the thumbs up.

So how do you feel about the ep now that the reviews are starting to trickle in? What has been response so far?
The responses have been great overwhelmingly positive and we're stoked on that. One thing we've set out to accomplish from the beginning was to write songs that we're proud of. Half-assing it just to put something out can be immediately picked out by an audience. We really had fun writing these songs and didn't just go through the motions to create them. To hear other people appreciate them is nothing but awesome.

Tell us something about the guest appearances on this ep. Chris sounds damn powerful, but Adam does a great job as well.
Chris sounds like a monster when he's singing and when I was writing the song On Our Own, I was listening to alot of his new band Hammerhead. I kept hearing his voice in my head as I was writing the parts that he wound up singing. I didn't know what I was going to do if he turned us down when we asked him to be apart of the record. Having been a fan of all of his bands, I was honored that he agreed to sing some lyrics I had written.

Adam was originally supposed to sing on Deadbeat from the demo but due to scheduling problems, he couldn't make it to the studio when we were recording. Once he ended up hearing the final product he was super bummed that he didn't make it down to lay down some vocals. I really wanted to collaborate with him on a song so I'm super happy that he was able to be apart of this record.

If you could have anyone do guest vocals on the next release with you who would it be and why?
I don't want to start becoming one of those bands that has a million guest appearences on each of their albums. Using a guest vocalist sparingly removes the cheapness of it when there is a guest spot on practically every track. But if say Human Furnace, Mike Score, or Karl Buechner hit us up and say they want to be part of a Bottomfeeder track, I wouldn't be opposed to it.

Where do you draw your inspiration from when it comes to the lyrics in your music? Do you have a main lyrical focus or do you just sing about anything and everything?
It's tough to say where my inspiration comes from because it's kind of sporadic. When it comes to songs like Deadbeat and Anonymous which are incredibly personal to me, they were personal demons I wanted to exercise. Songs like Suburban Warzone, Church Of Sin, and Expendable are social issues that I have strong feelings about and wanted to express my opinion on them musically. I'm typically a peaceful person but I definitely have some shit on my mind and Bottomfeeder is a good form of release. While I typically write for myself, I'm sure there are people out there that can identify with some of the stuff I talk about. Hopefully they can use me as a catalyst to release their rage.

What is the craziest thing that ever happened at one of your shows?
Thankfully nothing serious has happened during any of our sets. While my lyrics tend to have a negative attitidude, I'm all about the PMA. As Exodus would say "friendly violent fun" is what I want to see out there. Keep the mosh healthy but don't intentionally try to really hurt someone. That's just dumb and normally leads to something that eventually ruins a venue. So far the craziest thing that's happened during one of our sets was a few bloody noses and one KO (thankfully nothing serious came from that).

When you think about hardcore what does that mean to you? Could you tell me about what or who got you interested in it?
Hardcore is a strange thing, man. I've met some of the best people I know via the hardcore scene. Hell, it eventually led to me meeting my wife. There is a passion and a bond within this music that no other genre has. With other genres, with maybe the exception being the underground metal community, people tend to go to shows and go home. They hang out with their friends they know from the neighborhood and work and that's it. Where with the hardcore scene people latch onto one another like I've never seen. I have friends all over the country and some in other countries because of this music.

My buddy Mike Barlow gets the main credit for getting me into hardcore. I would like to believe that I would have eventually stumbled upon it myself but I can actually trace it back to him giving me a copy of Earth Crisis' Destroy The Machines that he put on a cassette tape for me. He also let me borrow his Victory Style 1. Those two discs and checking out bands in the "thank you" list opened the door for me. I had the opportunity to see Biohazard when I was younger but it wasn't until I went and saw Earth Crisis at the troc that year that I knew I stumbled upon something special. From the summer of 1996 until present day, it's been quite a fun journey. 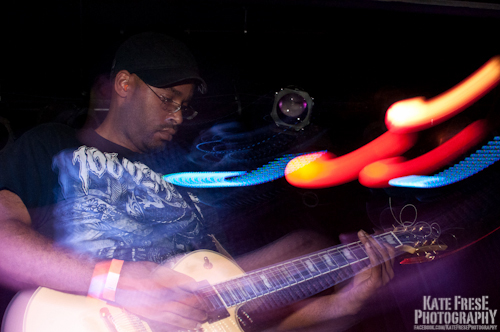 Who are some current bands in hardcore that you feel everybody needs to check out if they have not already?
Man there are so many good bands out there. Empire Of Rats is currently on the top of my list as the best new band out there. Rock Bottom, Doubledealer, Ante Up, Sicker Than Most, Hammerhead, Snake Road, Not Til Death...I could go on forever.

Anything you’d like to say to the kids out there?
Life is full of bullshit don't bring it to the scene. Too many fights and dumb drama ruin the experience for everyone. Keep the PMA and rage with like minded individuals. We're all there for the same reasons anyway. Above all...Stay Gnarly.


Big thanks goes to Kate Frese for letting me use the pictures. Check out her amazing work here; Facebook; Tumbrl.