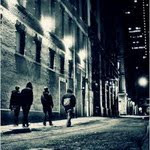 Just like on previous album, these cats still stick to the classic sound that New York city is famous for and they do it just right. Shit is NYHC to the bone, but Olde York puts their own twist on it so it’s more about paying respect to genre tradition than copying other bands. The energy of these songs is incredible and each track has its own character and vibe. You can hear they feel at ease with what they’re doing cause everything flows together so smoothly.

No faking the funk, just straight up hardcore played with lots of skill and finesse. From some almost rock-influenced parts to crazy ass mosh pit bangers, every element feels right in its place. I don’t even gonna start mentioning my fav parts cause there are too many! I think what’s good about this album is that you can imagine kids moshing hard to these songs in the pit, but it’s also a good listen on its own.

The other aspect of the band that I really like are the lyrics and general attitude. Whether they speak about racism, corruption and other society ills or just how hard it is for the honest man to get by, it’s all down to earth stories from the regular guy perspective like you and me. Everyone trying to make ends meet or just find their place in this world can relate to this stuff.

Bottom line, I can’t even imagine hardcore kid who wouldn’t be into this album.